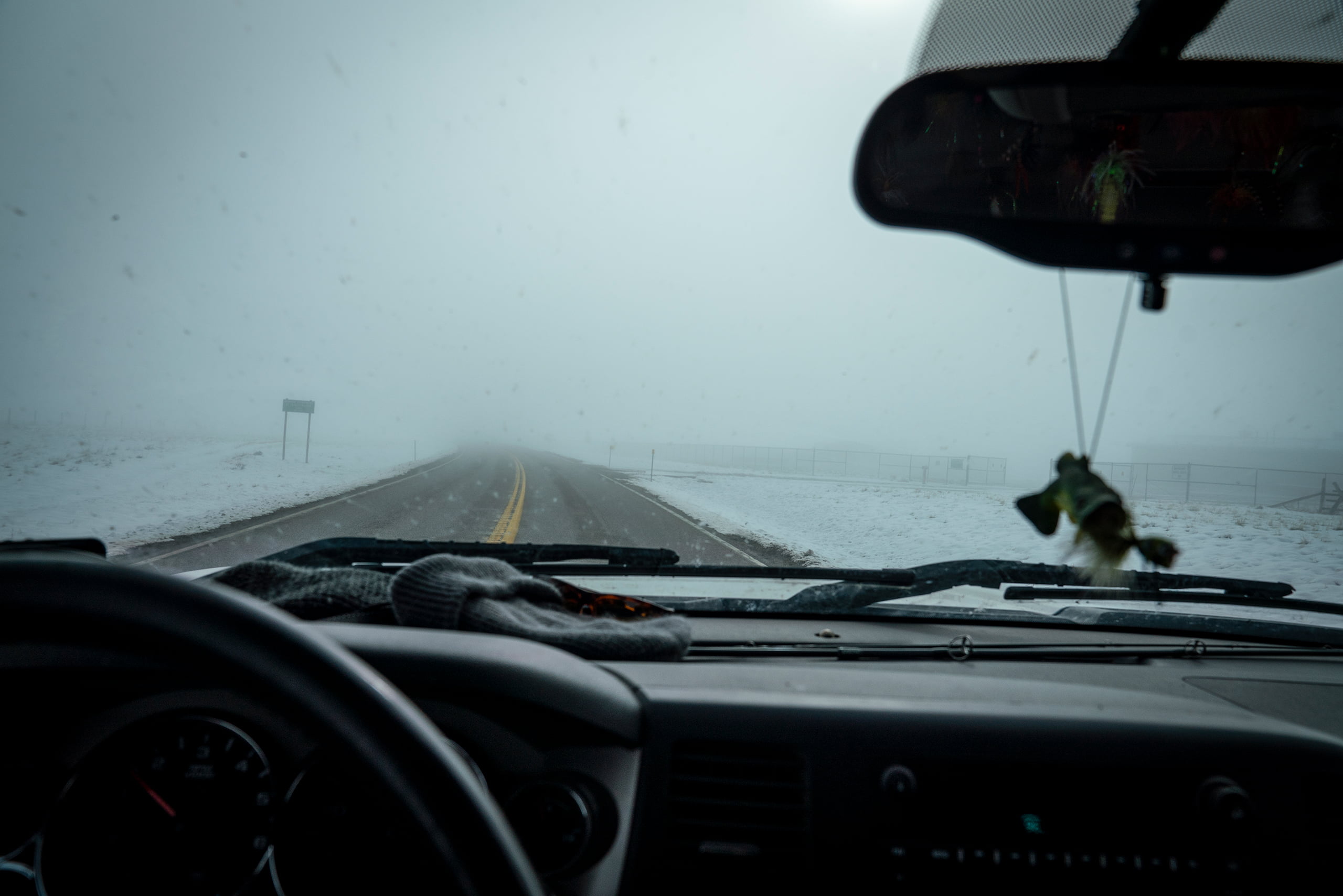 The most enigmatic of hatches.

I stood in a halfhearted drizzle with my back to a wall of willows while I surveyed the river. It was still at its wintertime flows, both the current and the fish barely moving. What I’d hoped would get the fish moving wasn’t showing up yet, and based on the weather and time of day, I doubted it would. 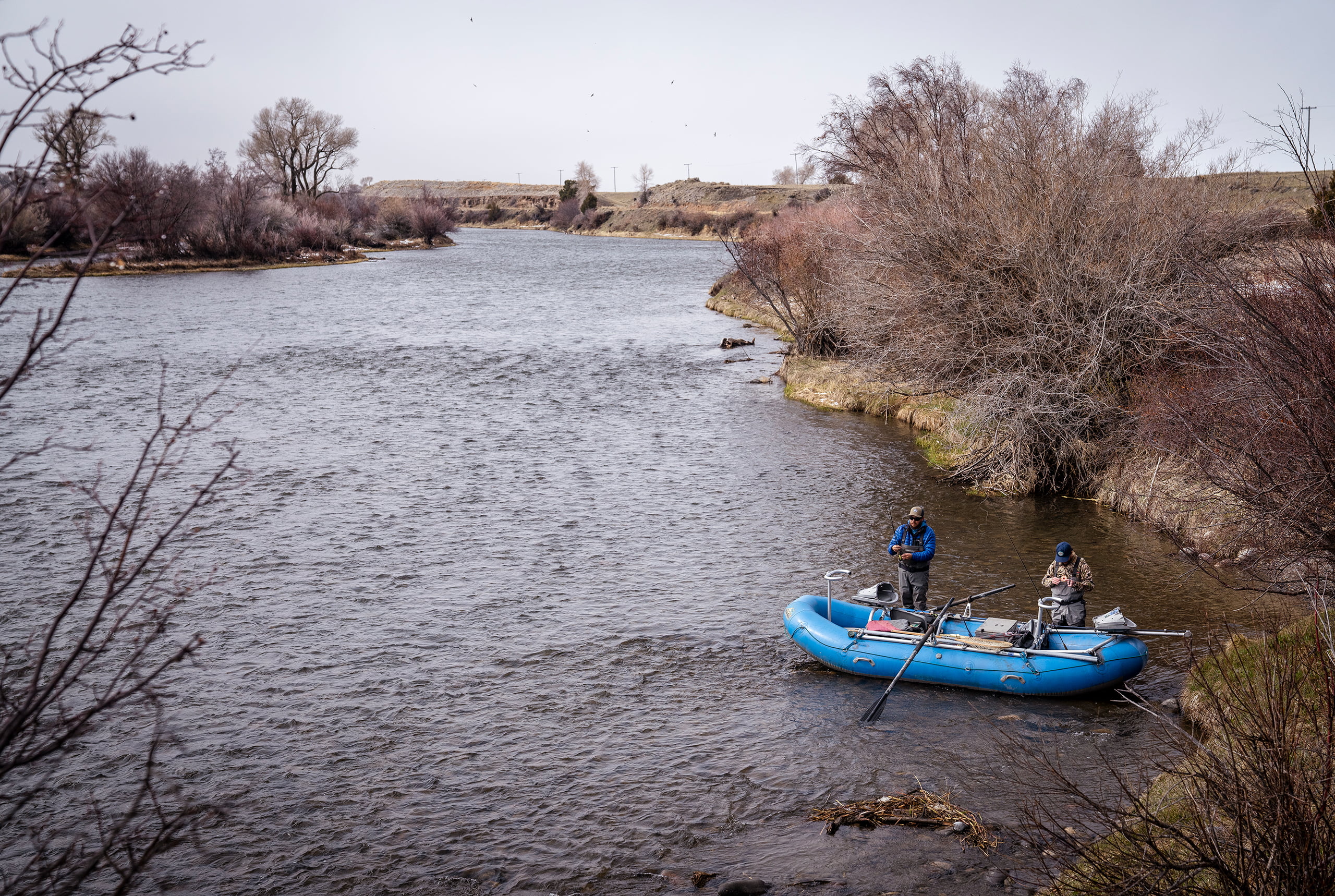 Ryan McCullough stood next to me and we watched his son Josh and my buddy Mike Kingsbury throw fruitless cast after fruitless cast.

“I can’t figure this out,” I said. “This is perfect weather. Perfect conditions. And nothing’s happening.”

The four of us were exploring a stream that was supposedly seeing good hatches of early-season blue-winged olives. The bugs were small, dark, and only came off when the weather turned sour. We’d planned the trip to coincide with weather just bad enough the bugs would be out, and hopefully few, if any, other anglers.

So far, we were the only things – fish or people – caught in the rain. 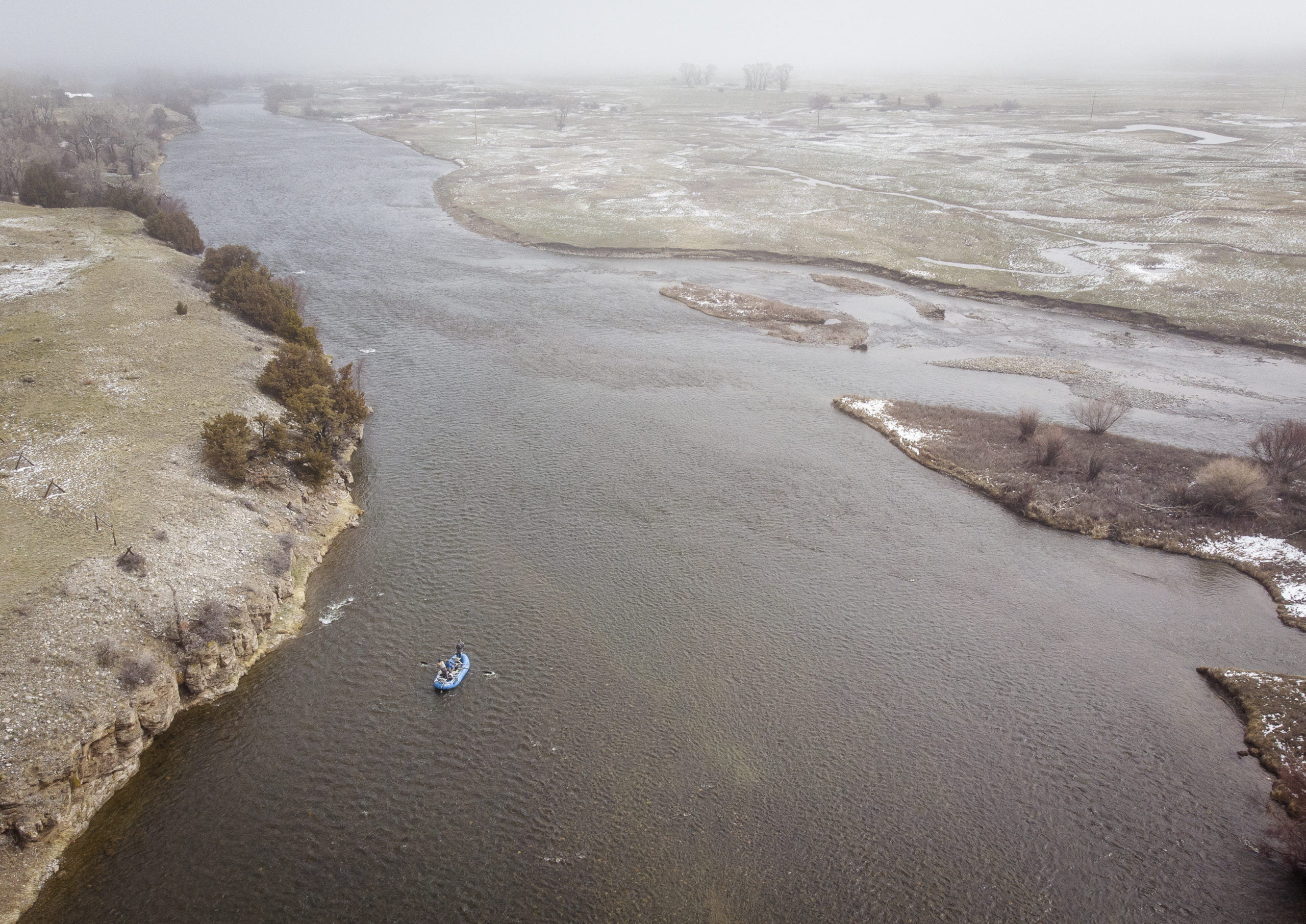 That we’d driven so far to explore a hunch only compounded the feeling that we needed something to happen soon. Mike and I both lived in Utah at the time, while Ryan and Josh drove down from Olympia, Washington. While any time I get to spend with Mike, Ryan, and Josh is certainly a win, we could’ve picked a more convenient location and time to break bread and catch up on life.

“Maybe we should’ve waited a few weeks for the skwalas,” I muttered. 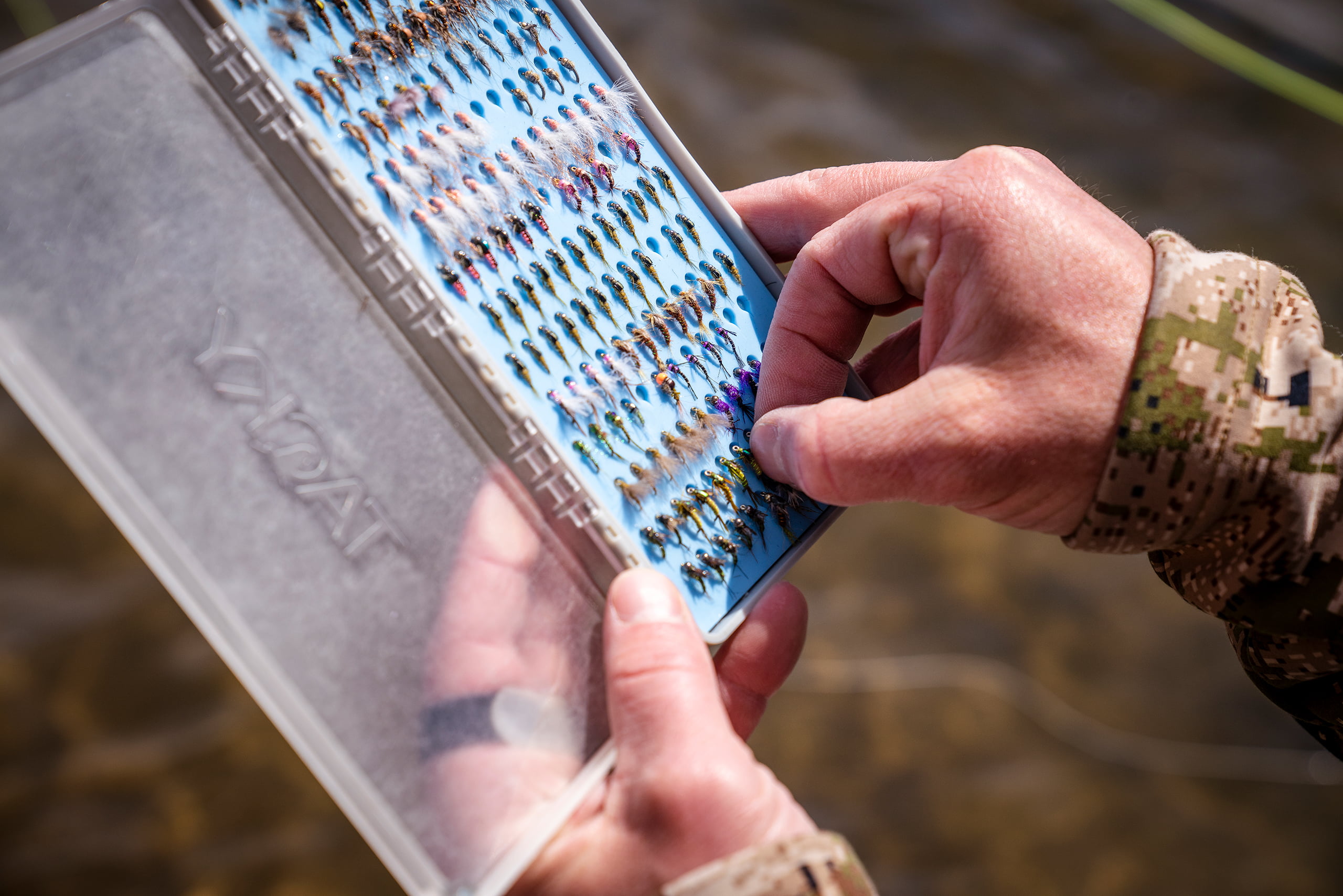 Then, cutting through the pitter-patter silence of a rainy day on a small piece of water, we heard the unmistakable sound of fly line going tight. Moments after, the whine of an old click-and-pawl reel filled the air.

“I got one!” Mike hollered.

Sure enough, he stood downstream about 100 yards, his fly rod bent in half. “It ate the dry!” 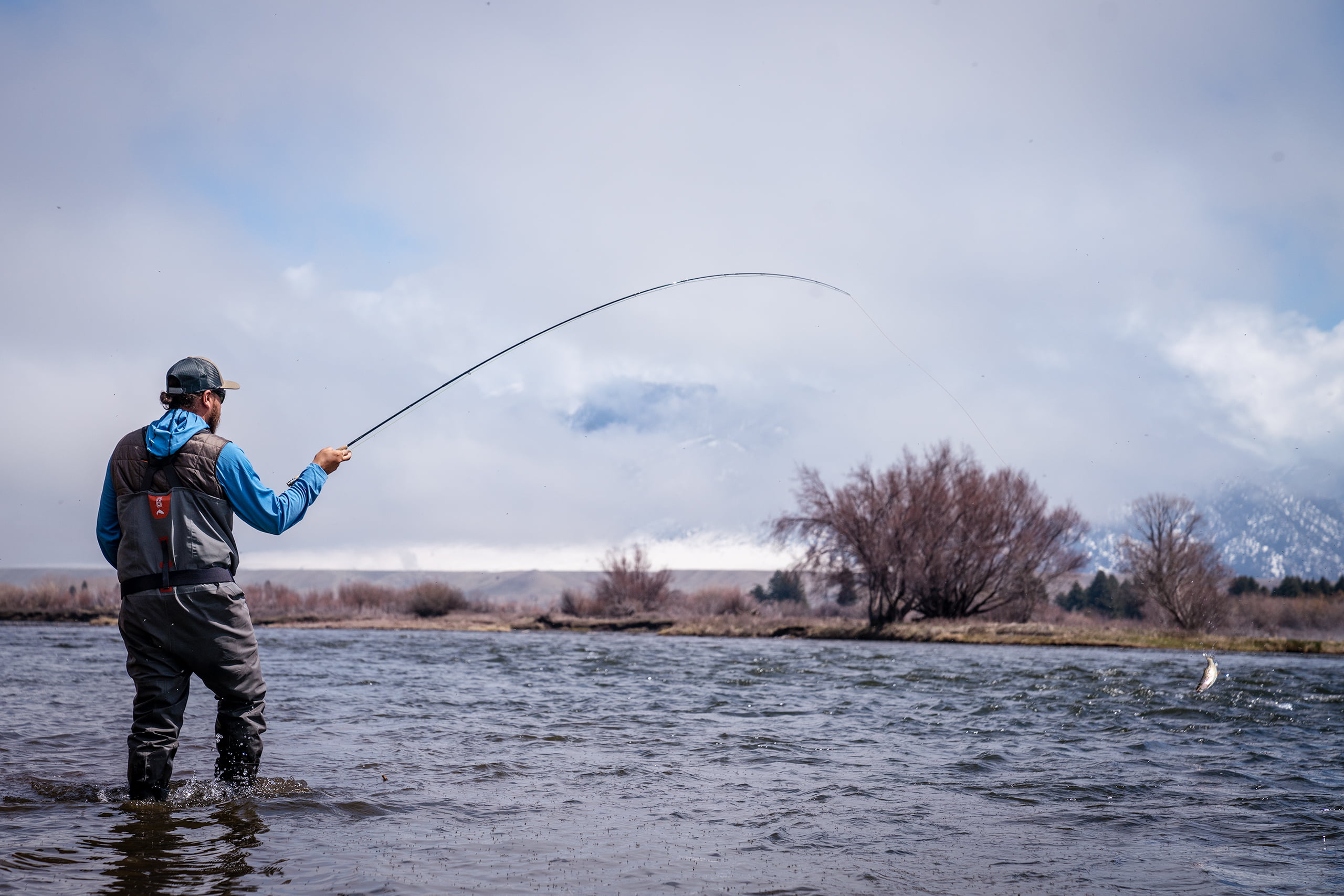 I glanced back at Ryan. “I haven’t seen any bugs yet.”

Mike played the fish quickly into the net, popped the hook free, then held the fish up briefly so the rest of us could see. Its pale golden flanks glittered dimly in the gray, flat light of midmorning.

Almost as soon as Mike let his fish go, Josh let out a yell. Ryan and I turned to face him, 100 yards upstream, just as the brown trout jumped, landed, then pulled off another 20 feet of line.

“Well, I guess they finally got the memo,” I said. 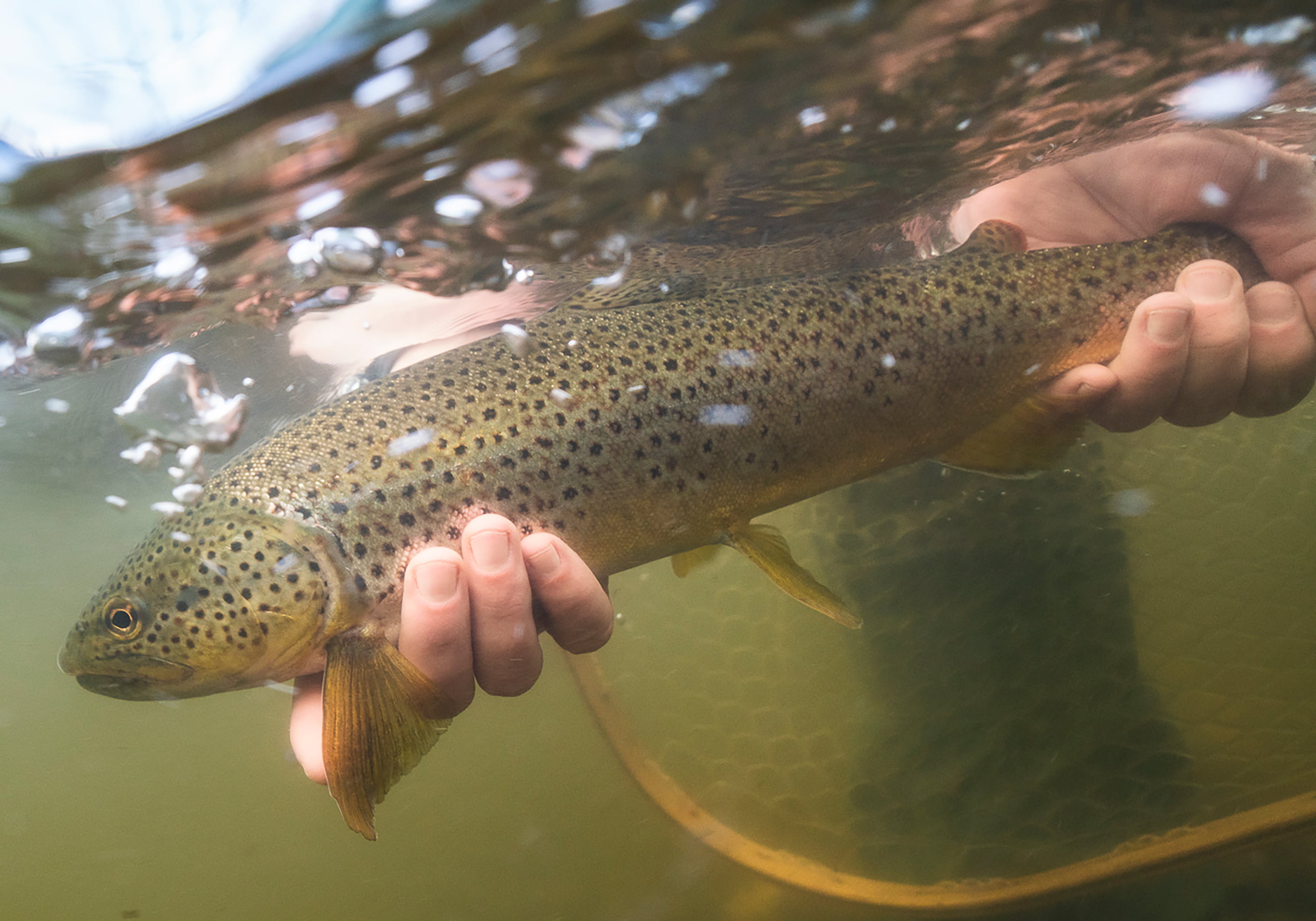 Ryan and I waded back into the water, giving each other enough room to cast. Between the raindrops, I saw tiny, dark bugs fluttering lazily. Mayflies tend to fly with a nonchalance that’s undoubtedly part of why trout love them so much.

As though someone had thrown a switch, the bugs came off in droves, and the fish reacted as you’d expect. Soon, the once-tranquil surface of the river was rolling from the unending series of rises as far as the eye could see. It was a perfect hatch. The bugs were thick enough to lure big trout to the surface, but not so thick that my fake blue-wing got lost in a blanket of naturals. 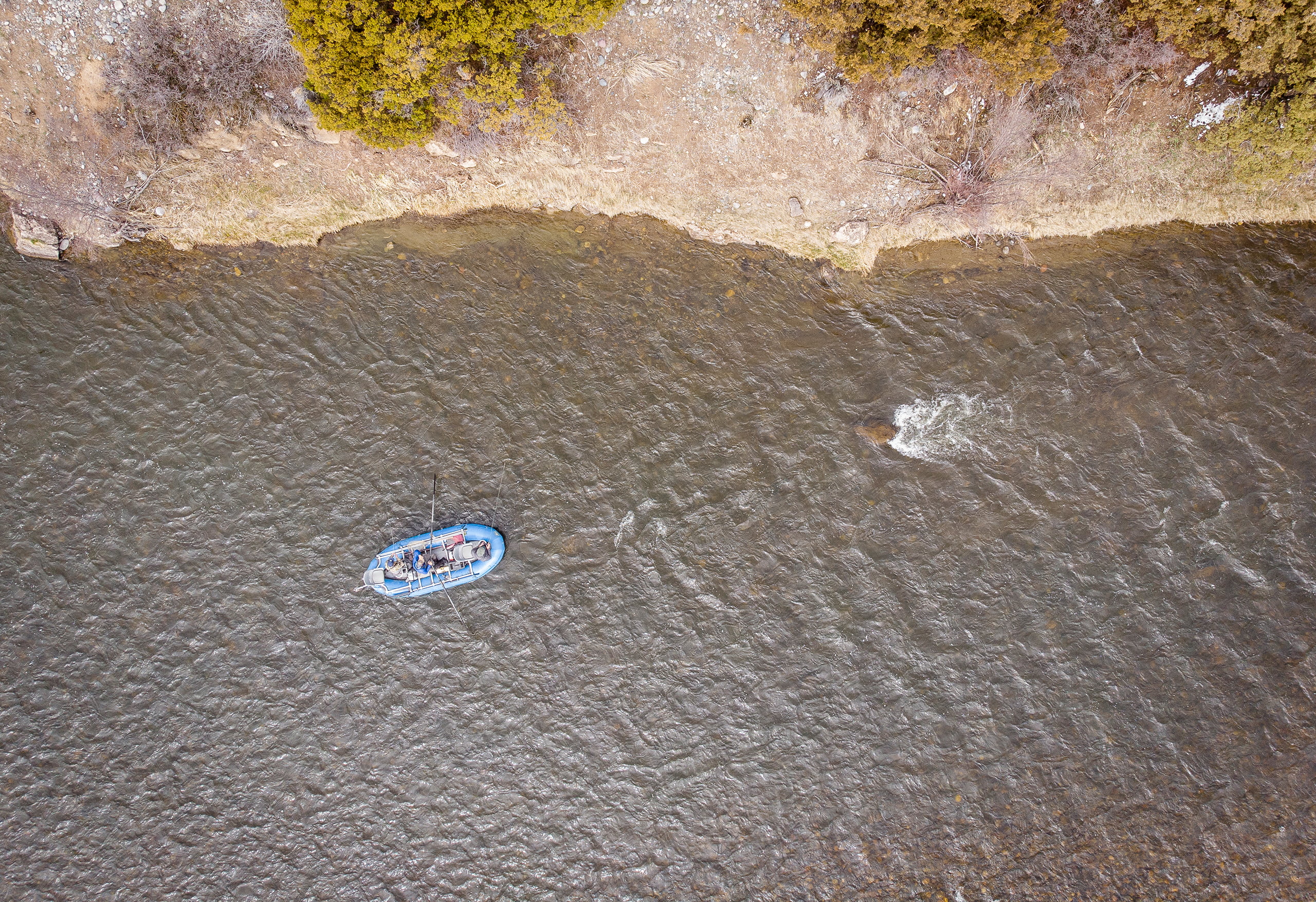 I don’t know how many fish I caught that day – I never started counting. The hatch was too good to worry about which fish I landed and which ones went free. It was a rare moment of angling nirvana, where you could thoroughly lose yourself in the machinations of the natural world.

The hatch finally petered out around 4 p.m., almost five hours after it began. The four of us fished without a break, pausing only to tie on new flies, tippet, or to grab the rapidly-depleted bottle of floatant from whoever remembered to bring it. My back ached, my feet were mostly numb, and I was down to my last battered spent-wing fly when I finally called it a day. 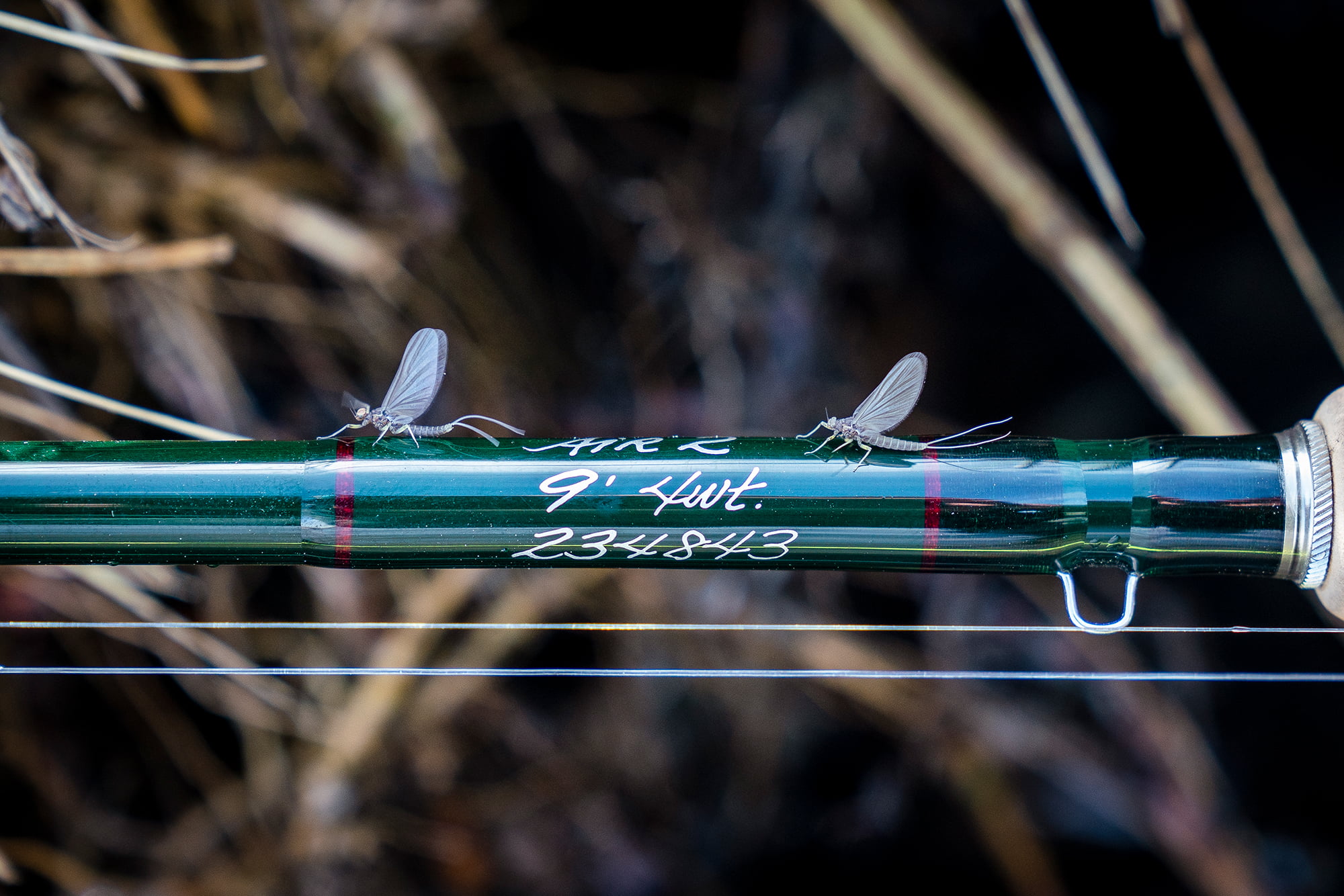 Back at camp, we shuffled around in a bit of stunned silence. To this day, that’s still the most magnificent blue-wing hatch I’ve ever witnessed. It reminded me of the picture so many folks I know try to paint of a stonefly hatch. A river full of fish, eager to eat, hitting the surface with something close to reckless abandon. The only difference was these fish weren’t hitting just anything. The slightest bad drift, or one too many false casts, put them down. I broke off a half-dozen flies, at least, because I set the hook before the fish had fully eaten my blue-wing. It wasn’t easy fishing by any means – the fish and the bugs kept me on my toes.

It was the sort of fishing that demanded good casting and attention to detail, but rewarded both handsomely. That I got to spend the whole day throwing dry flies only made the experience that much more unforgettable. I think that’s why I enjoyed that blue-wing hatch more than any other stellar dry fly hatch I’ve fished. Part of fly fishing’s allure is the idea that you’re waging some sort of passive fight against nature; that we only sometimes win is what keeps us coming back.

Spencer Durrant is a fly fishing writer, guide, and bamboo rod builder from Wyoming. He’s the News Editor for MidCurrent, and a columnist for Hatch Magazine. Connect with him on Instagram/Twitter, @Spencer_Durrant