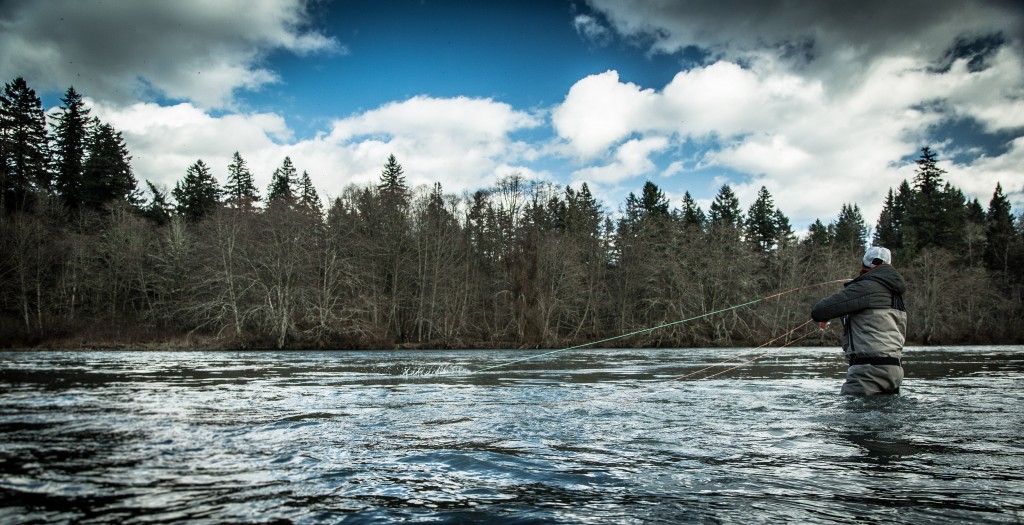 What is the current film about?

“Our Two Hands” is an investigation into our society’s complex and intimate relationship with fly fishing for Salmonids. How did we arrive at this crossroads of conservation and sportsmanship and what are the creative alternatives to the currently flawed management practices for Salmon and Steelhead?

Where are you filming?  Where will you film the longer version?

We filmed the initial cut for the trailer mostly in Oregon and Idaho. The center of the controversy over fishery management is based in the Pacific Northwest and the northern part of Idaho, we will be focusing on the coastal rivers, Columbia River and Snake River tributaries. Depending on funding we would love to go back east, to the midwest and to wild steelhead and salmon country in BC.

What unexpected challenges have you faced so far in filming the short version?

Wrapping our heads around the story line and arc of a project as broad as this is challenging. Trying to stay focused on getting shots and sound that personifies the struggle that both the communities and fish are experiencing has been an interesting process. I have this picture of what it looks like in my head, and getting that to play out in front of the lens takes coordination and timing. The weather in the PNW is not always conducive to camera equipment either. We got creative this last trip and jimmy rigged a rain guard with an umbrella, some zip ties and a baby carrier.

Clearly you feel is it important to make this film. Why is this such a passion project for you?

I am relatively new to two handed casting and swinging flies for steelhead, but the process has taken over my headspace. I enjoy the journey that fly fishing takes us on. Fly fishing brings me to beautiful places, continues to introduce me to inspiring friends and mentors and allows me to interact in a unique way with amazing creatures. The mystery, superstition and human history with steelhead is what drives my passion these fish. It is a contentious time concerning the current status and future of wild steelhead and the people involved will ultimately decide what that future holds. I have never been so emotional and committed to learning about a fish like I am with Steelhead. The literature and lore, the flies, the toys (rods, reels, lines), the places, the cast and the grab have embedded their importance in my life as a fisherman. I want to introduce the fly fishing community and beyond to the guides, non-profits, politicians and companies that are fighting to come to a middle ground on the issues. What does that middle ground look like? These fish have held a place in the human experience for thousands of years. We think it’s time they were recognized for their intrinsic value (value in and of itself). If that means not swinging flies or chucking gear (recreational or commercial), taking out the hatcheries and dams (economics) and protecting these ecosystems (litigation and activism) then so be it. Humans like Steelhead are amazing and adaptable creatures. It’s time we conform to the conditions they demand for their health, not the other way around.

How have some of your past projects prepared you to tackle this new film?

Over the past few years I have been shooting photos and short films from trips and experiences I have had across the west and around the world. I never really saw myself as a filmmaker or photographer at the time. I merely enjoyed sharing my travels and adventures with others via my blog and website: www.bloodknots.com. When we first started talking about this project I knew we were going to need some guidance. I sought out talented partners to help visualize the story, shot list and technicalities that I may not have covered in my own head. It has been great to have several people involved in Our Two Hands that are not fisher people. It gives the film a diverse lens that can both appeal to the obsessed spey rodder and the interested viewer. Our passion for the fish and the sport is what has set us up to make this film. Those qualities are instilled in Bloodknots and have guided our project first and foremost. The technicalities, camera work, graphics, etcetera are all things that we have experience with and act as tools to express the message. We are always learning both in the film world and the fishing world. It keeps us coming back!

Who is supporting you in making the film?

Our sponsors so far for the film are: R.L. Winston Fly Rod Company, Simms Fishing Products, Scientific Anglers, Airflo, Goal Zero and Coalatree Organics. As we speak the Our Two Hands Kickstarter is up and running, concluding on 7/23. We have some great incentives for contributions including a 13′ 3” Winston BIIIX two-hander. We would like to say thanks in advance to everyone that helps make this project a success. Brian Roller of TWiG Media Lab is heavily involved in the filming and post processing as well. We are stoked to have him join us! This wouldn’t be possible without the time and dedication of everyone that has been involved so far. Marty and Mia Sheppard, Bryan Silvey, Tom Larimer, Travis Johnson, Bill Bakke, Rick Tingey, and Steve Schmidt of Western Rivers Flyfisher, to name a few.

How different will the long form version of the film be from the short version?

The cut we released with the Kickstarter acts as a trailer or pilot of sorts that portrays the feel of the film, the general arc of the story, and the characters involved. This trailer shows the viewer potential for the full length feature and our commitment to the project. We have loads of great footage. We could cut a full length film right now, but we would like to delve deeper into the project, meet more people, and craft a more in-depth story about steelhead and society.

How do you plan to find funding for the long form version of the film?  Are you getting any help?  Is this something that’s been done before in making a film like this?

Finding funding for the film has been one of the toughest parts of this process. We have some great sponsors that pitched in for the first round of filming, and we have set out our budget for the rest of the filming and post production. If successful, The Kickstarter Campaign for Our Two Hands will allow us to proceed filming over the late summer, fall and winter of 2014 and into 2015. These crowdfunding sites are interesting. It’s the first time we have tried fundraising this way and it has really struck a cord with this project. This film is about community, and the Kickstarter can only be successful with an outpouring of support by people invested in some aspect of the project. We have invested our own small fortunes, hundred of ours of time and our hearts into this film and want to see it succeed. If you care about two handed culture, swinging flies for Steelhead and Salmon, building a sustainable future for these fish and bringing these issues to the world, please contribute what you can through the Our Two Hands Kickstarter Campaign.