Kisutch On The Swing 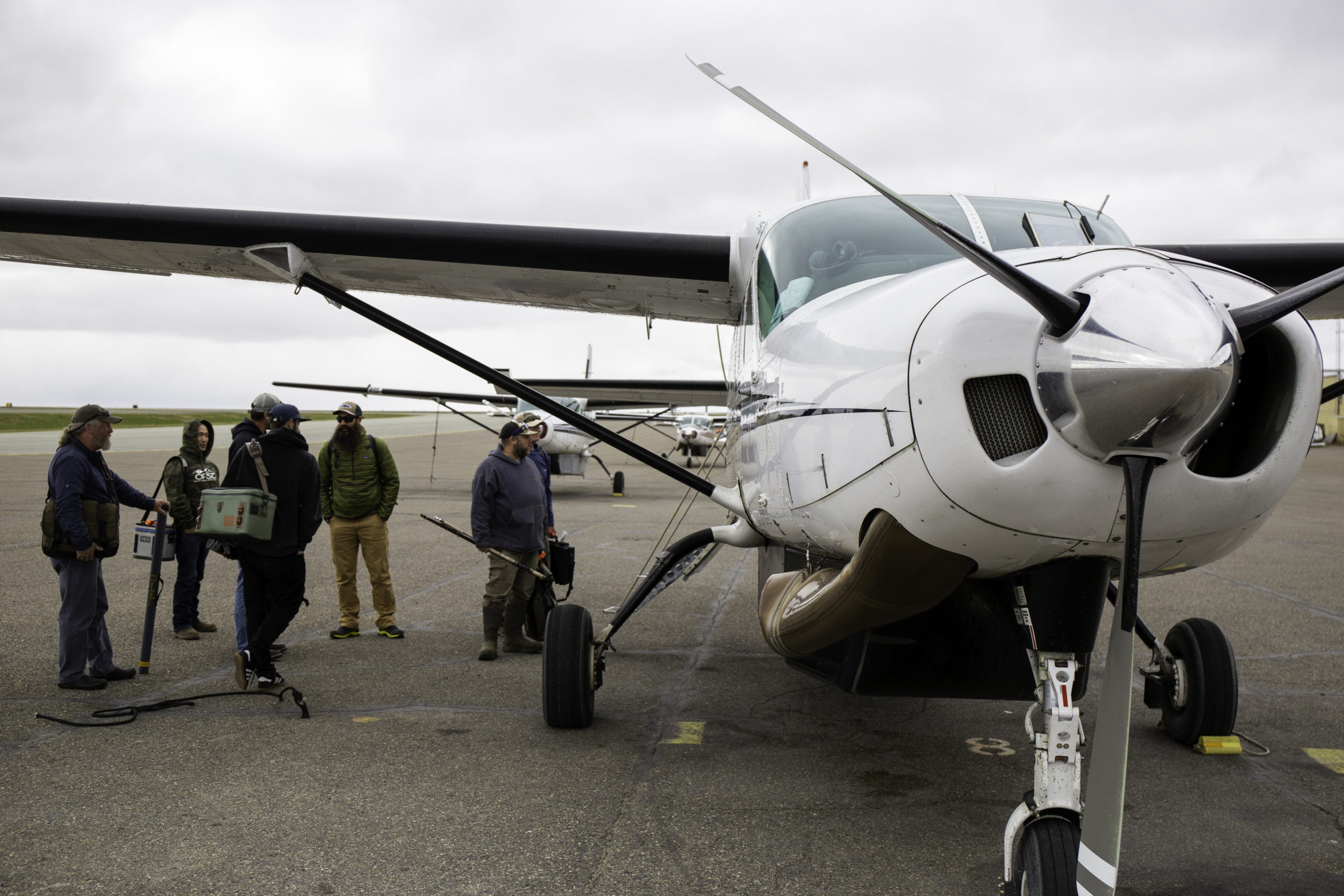 As the glorious but brief northern summer draws to a close, a chill in the air and shortening daylight signals the onset of autumn – and with the change in seasons, comes the delightful opportunity to pursue coho with a two-handed rod and swinging fly.

Silver or coho salmon (Oncorhynchus kisutch) are members of the Pacific anadromous salmonid clan that are avidly pursued by legions of fishermen up and down the west coast.  This species is a favorite fly rod quarry:  the fierce grab followed by spectacular leaps and hard charging runs from a hooked silver is one of angling’s most exciting thrills, and I savor the memories of such wonderful battles well into our Alaska winter months of frigid cold and prolonged darkness. 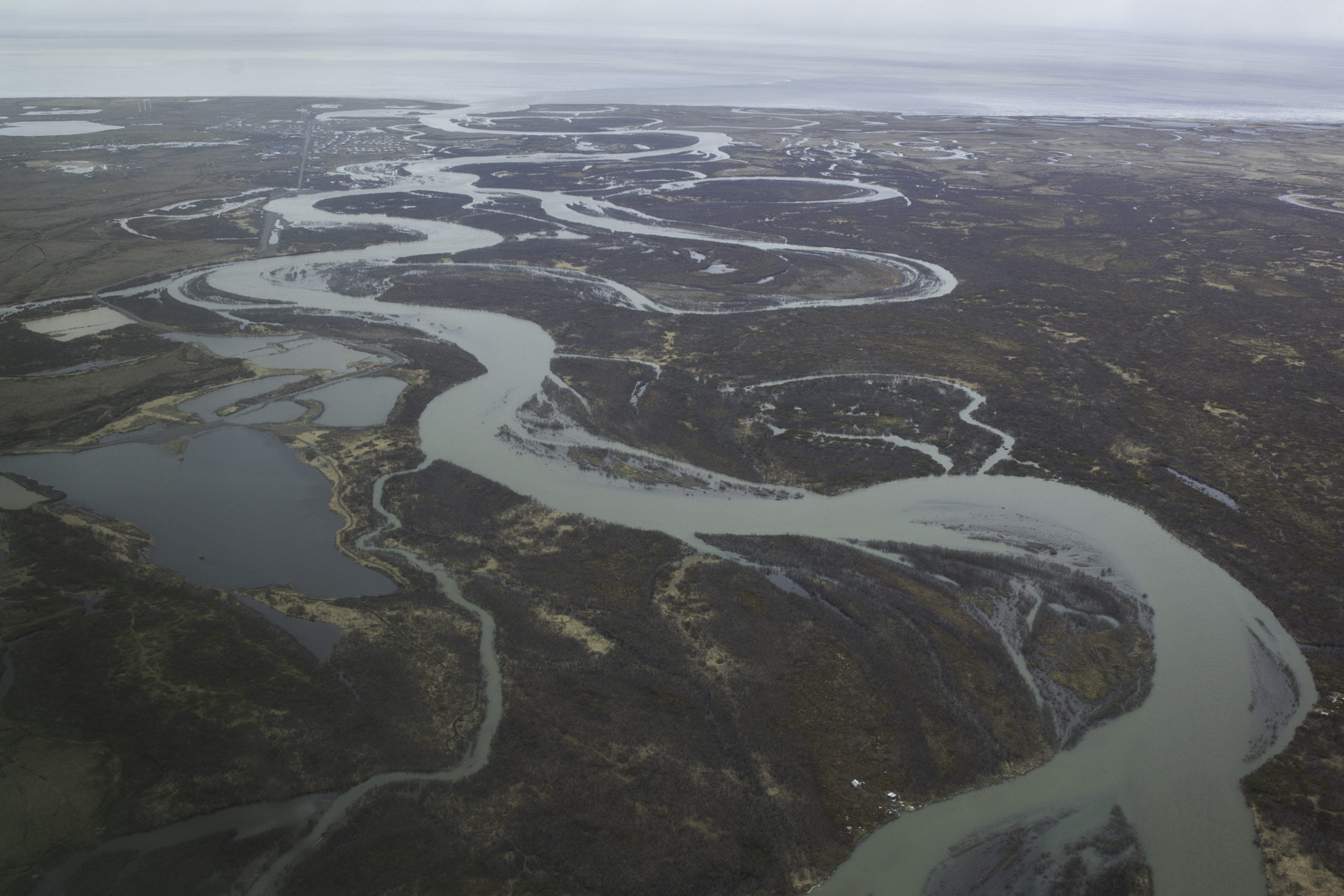 Cohos are enjoyed by double-hand rod devotees, and those who are learning how to use such tackle will marvel at their responsiveness to a swung pattern, with the abundant opportunities for multiple hookups offering an excellent introduction to Spey fishing techniques.  My first successful catch on a two-handed outfit was a silver salmon… the big buck smashed my streamer as it neared the end of its arc, and ripped the line out of my hands as he tore away across the swift current, with the ensuing howl from the Hardy reel adding the perfect ambiance to this delightful experience. 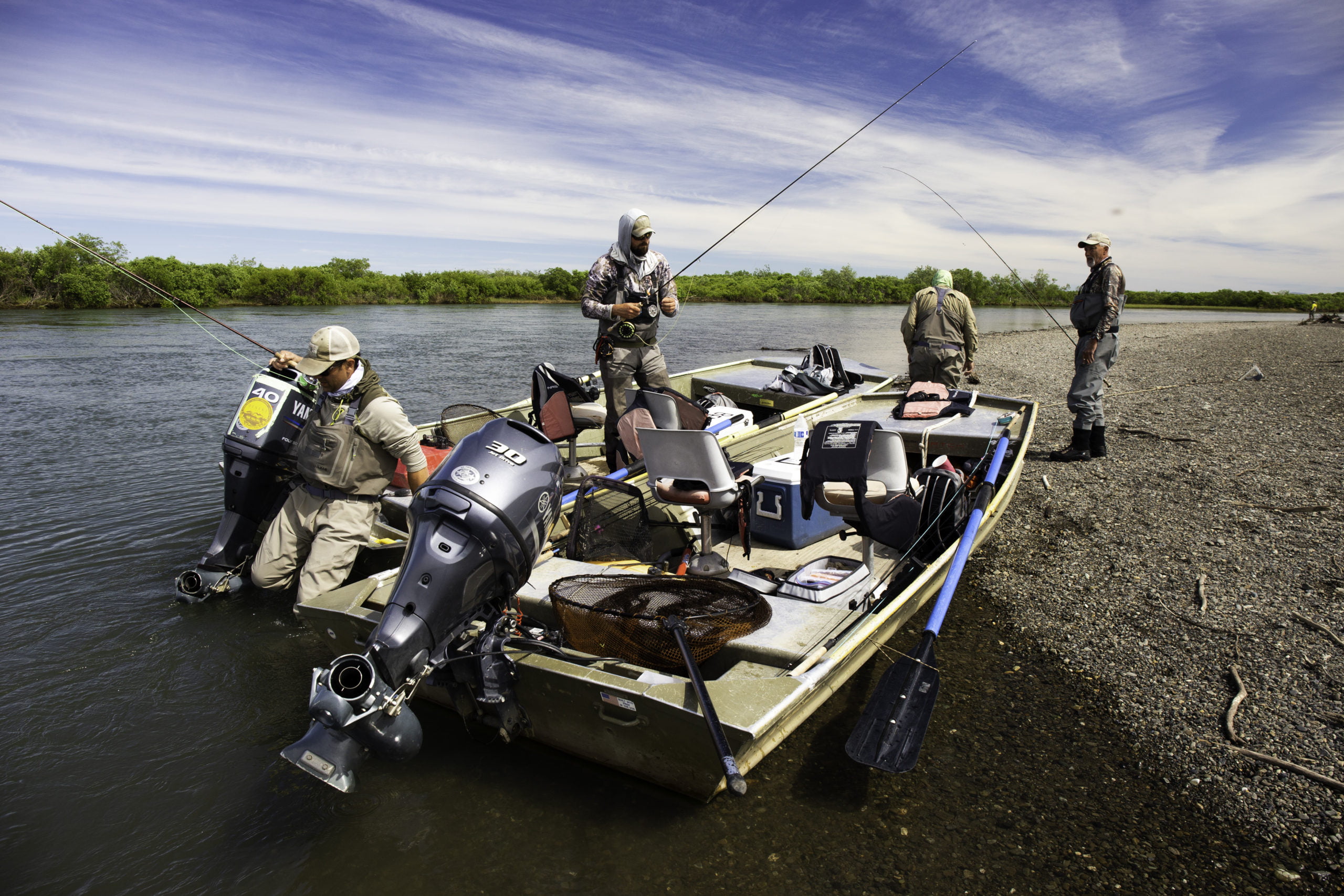 Silvers prefer a fly with considerable action, so many fishers will employ a pattern with weighted heads (and an abundance of wiggly material plus flashy tinsel) that can impart an up and down motion via “false strips” — by pulling and releasing line repeatedly, about a foot each time — as it moves across the current.  Strikes can occur at any moment, and these fish will often follow the streamer through the entire swing, so I’ll add a series of false strips at the conclusion of the arc to provoke them (and be prepared for the “hang down” grab that’ll occur directly below you).

In freshwater systems, cohos usually avoid swift velocity areas, so seek out the softer edges and slower runs that’ll still have sufficient current to swing your fly.  As these salmon will strike patterns that are moving slightly above – but not below – the depth where they are holding, select the appropriate sink tip and streamer weight to ensure that you are fishing at the correct level in the water column.  I’ll start with a bright pink articulated pattern, switching to a darker color (e.g. cerise/purple or black/chartreuse) to continue enticing the fish on successive passes; move to a new spot once all the biters have been hooked. 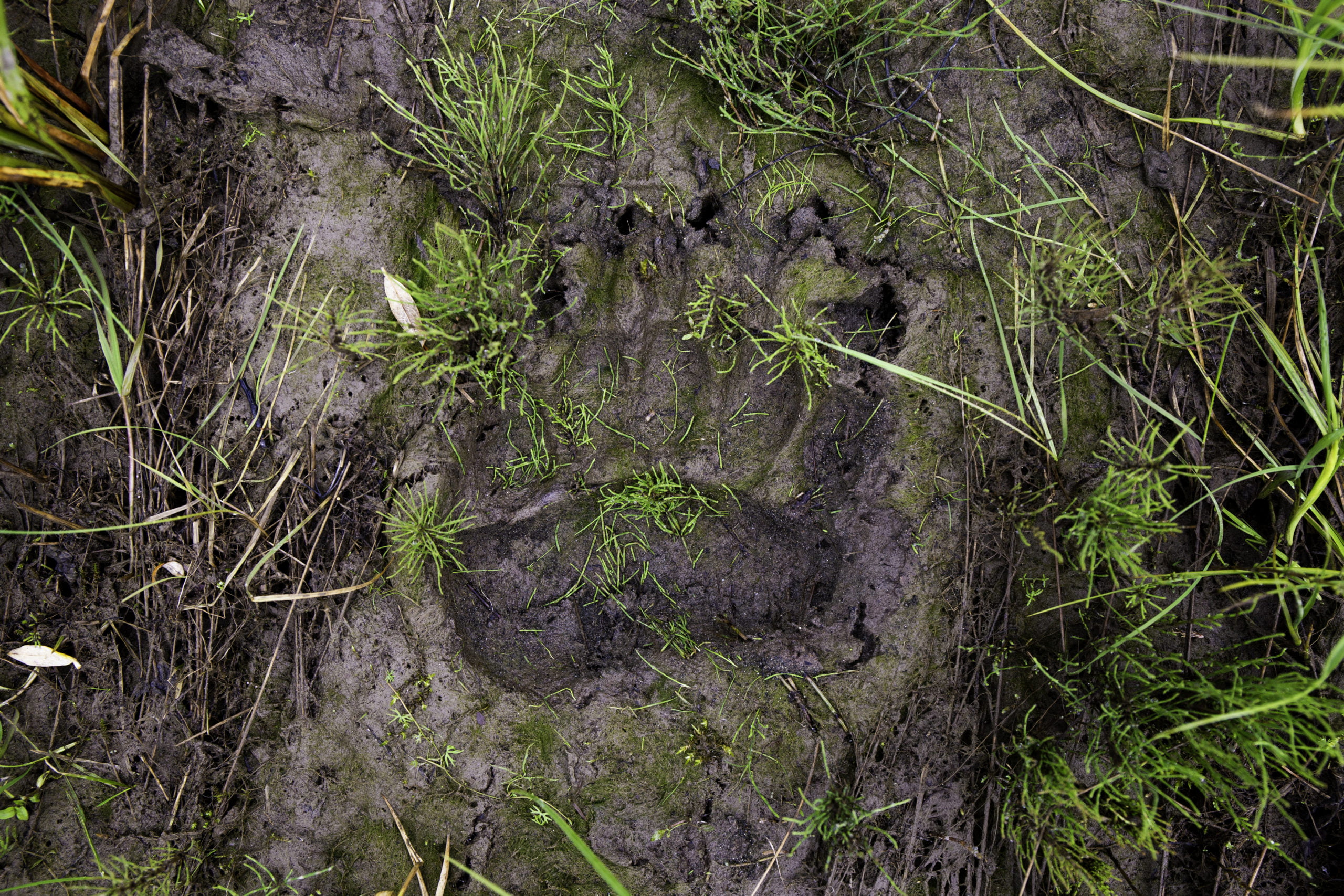 For the optimal coho swing fishing experience, head to a remote coastal watershed in Alaska where angling pressure is light and the salmon are abundant.  Systems such as the Sapsuk, Kanektok, or Ayakulik rivers (to name a few) host large runs of sea-bright fish and have ideal conditions for two-handed swing angling.  Mid-August through late September are the optimal weeks to pursue Oncorhynchus kisutch in these wilderness settings, where humans are vastly outnumbered by the piscine and wildlife denizens.  Tent-style camps and lodges reached via chartered air flights cater to visiting fishers, and jet boats provide transportation to spots where you wade and cast in these rivers.

On a recent trip to the Alaska Peninsula during early September, our timing was perfect, as wave upon wave of mint-bright silver salmon swarmed up the river and attacked our swinging flies with abandon.  We fished with three anglers per guide, and triple hookups occurred so frequently that we grew to expect this upon arriving at every coho-laden run.  My Winston 7 and 8-weight Spey rods were constantly bent on fish that ranged up to 14 pounds; changing fly colors plus sink tips enabled me to maintain constant action throughout each day.  Because our camp was located adjacent to the prime water, a number of us would continue our fishing post-supper, until the resident brown bears arrived for their evening repasts and caused a tactful retreat back to the safety of our electrified compound. 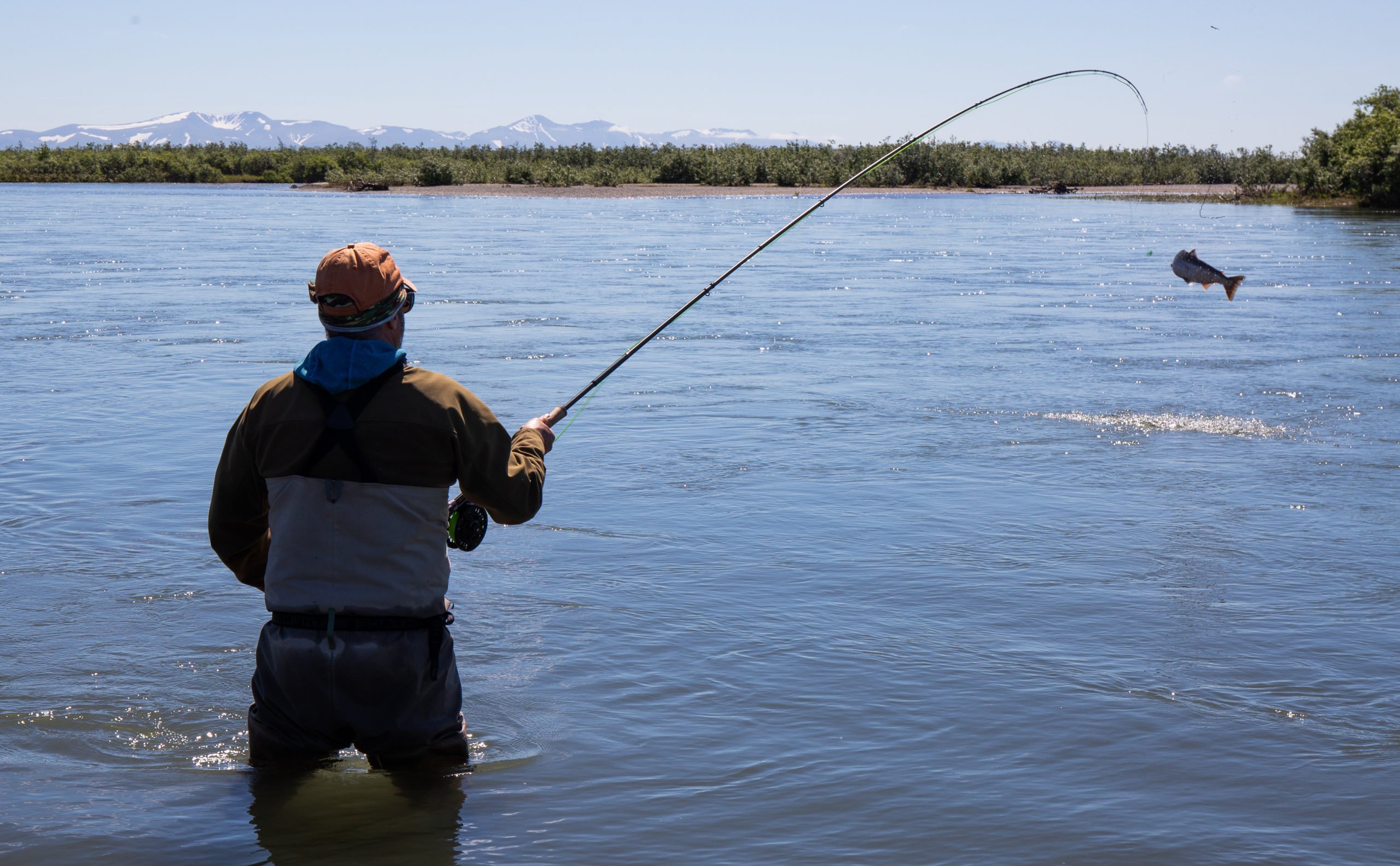 Surface gurglers fished on switch rods and floating lines provided an exciting option to sunken flies, with the best top water action occurring early in the morning.  Throughout each day, pods of kisutch could be seen chasing our offerings, with the most aggressive and swiftest ones grabbing, then screaming away and vaulting high in the air upon feeling the hook  (which were barbless, to facilitate their release).  Head guide Mike Flynn was kept busy with his netting duties, and big grins plus high fives celebrated each successful capture.

One afternoon, I had our guide Trevor Covich drop me off at a spot where we had seen squads of silvers lined up along a willow-choked bank.  This place had been unfished due to the deep, soft mud along the entry shore, which I struggled through to reach the constantly rolling fish.  To my pleasant surprise, the clinging silt gave way to firm gravel as I approached the thalweg, and I was able to throw a long line out against the far bank.  The 4-inch long, chrome cone head streamer began its swing, and was instantly grabbed as I made my first false strip.  A big hen dashed downriver and cartwheeled high in the air, then proceeded to empty my Hardy Duchess reel with the Winston Spey rod bent all the way to the cork handle.  I made successive casts from each spot until there were no grabs, before taking the next steps down the run.  Ninety minutes of blissful action passed by thusly, before Trevor returned to pick up a very satiated angler to rejoin his companions for the short boat ride back to camp that evening. 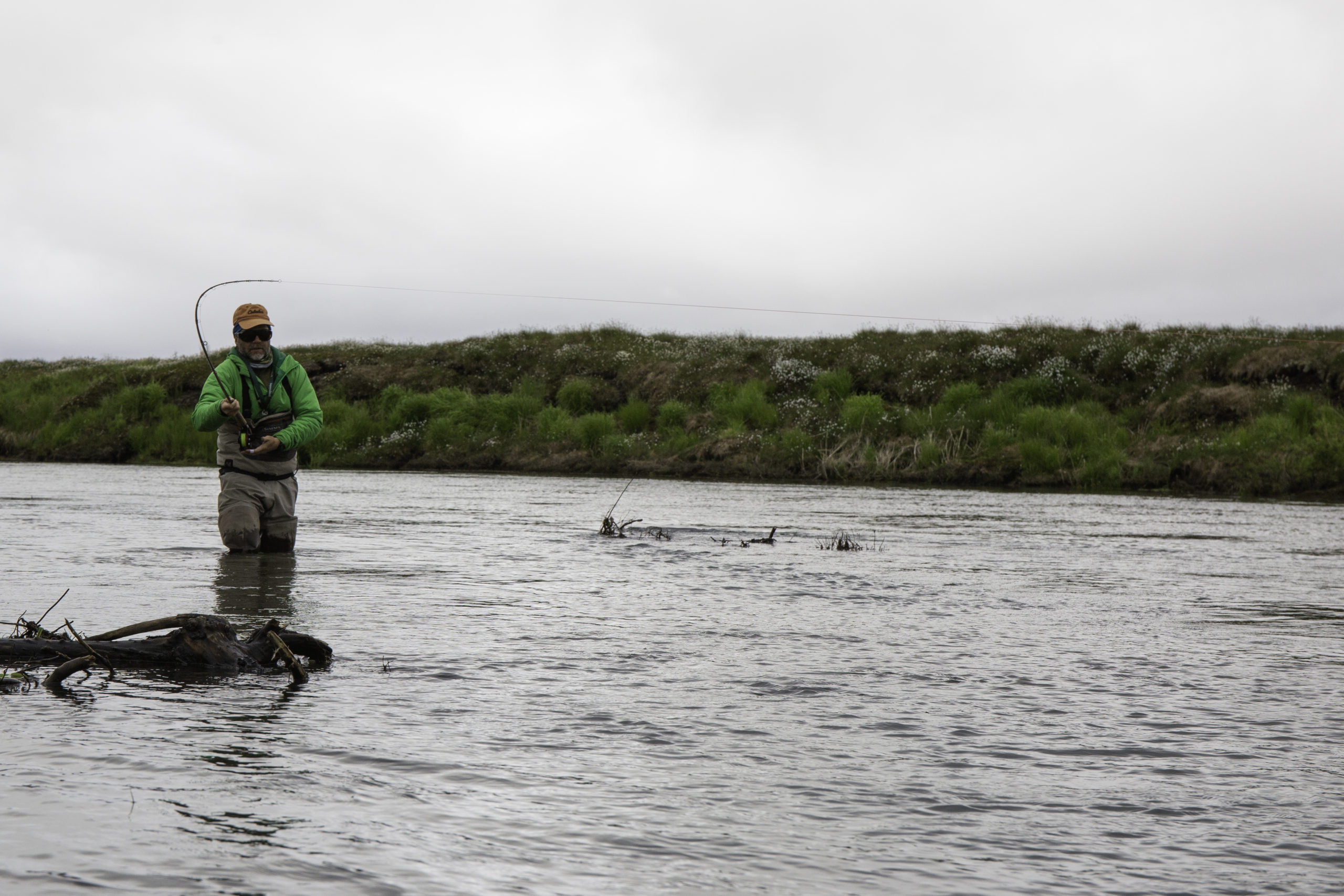 The final kisutch of this trip proved to be the most memorable.  I was fishing just above camp at a run called Silver Tree, so named for the big alder where cohos would stop to rest on their upstream sojourn.  As I cast my Winston 8-weight Spey and swung the big cone head fly, it was smashed by an enormous coho just outside the overhanging branches.  The big buck powered his way across the strong currents, then decided that his route to freedom was via a swift return to the Bering Sea.  The click pawls on the Hardy erupted into a banshee howl as the fish made a stunning run towards the rapids hundreds of yards below.  The river’s surface blasted open as he leapt repeatedly during this mad dash; I saw that this fish was far bigger than any I had encountered during the week, and I despaired over the slim odds of landing him in the heavy flows, as I was unable to get around the tree to follow.  He finally stopped just above the start of the choppy water, and in desperation – with the hope that the barbless hook would somehow remain attached to his jaw – I quickly stripped out line and let it belly below the salmon.  To my relief, this worked, and he began to swim back upriver against the downstream pull of the Skagit head.  I slowly worked him towards me, but had to repeat the tactic as the fish tried again and again to flee in the opposite direction. 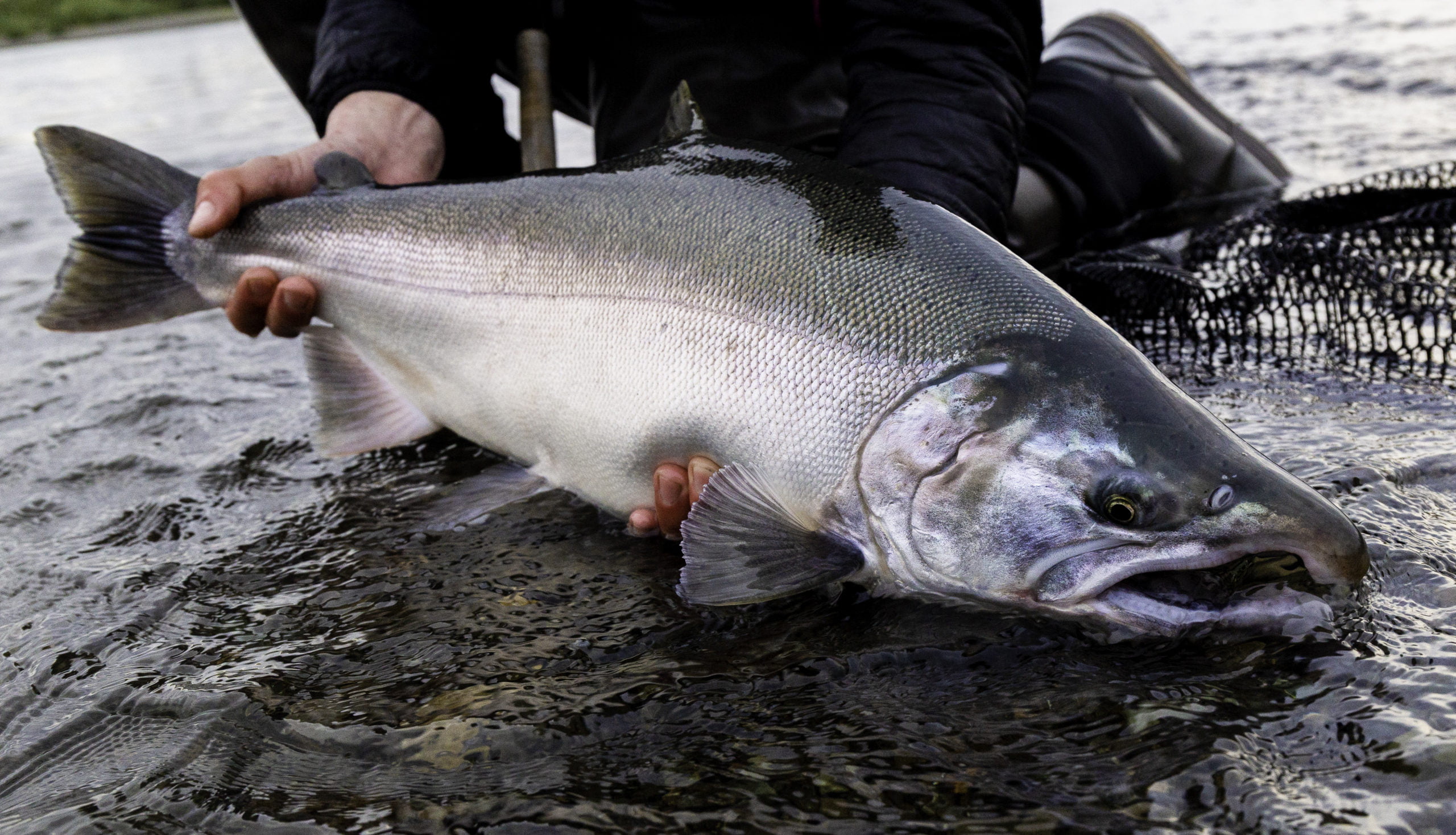 After many long and anxious minutes, I had coho within a few yards of me, but he stubbornly refused to move out of the current.  I bent my rod deeply as I led him downriver and tried to draw him towards the quiet water along the bank – but the salmon would flex his massive body and power back into the flows.  It required a dozen attempts at this merry-go-round before I was finally able to slide him into the shallows next to my feet.  I could barely grasp the broad peduncle above his tail with both hands, and managed to snap one photo before the hook fell out of his mouth — whereupon the fish sensed his freedom and dashed back into the channel, dousing me with spray as a final salutation from a worthy opponent.  I hope that his progeny successfully return to challenge future silver salmon Spey anglers!

Check out this featured gear: 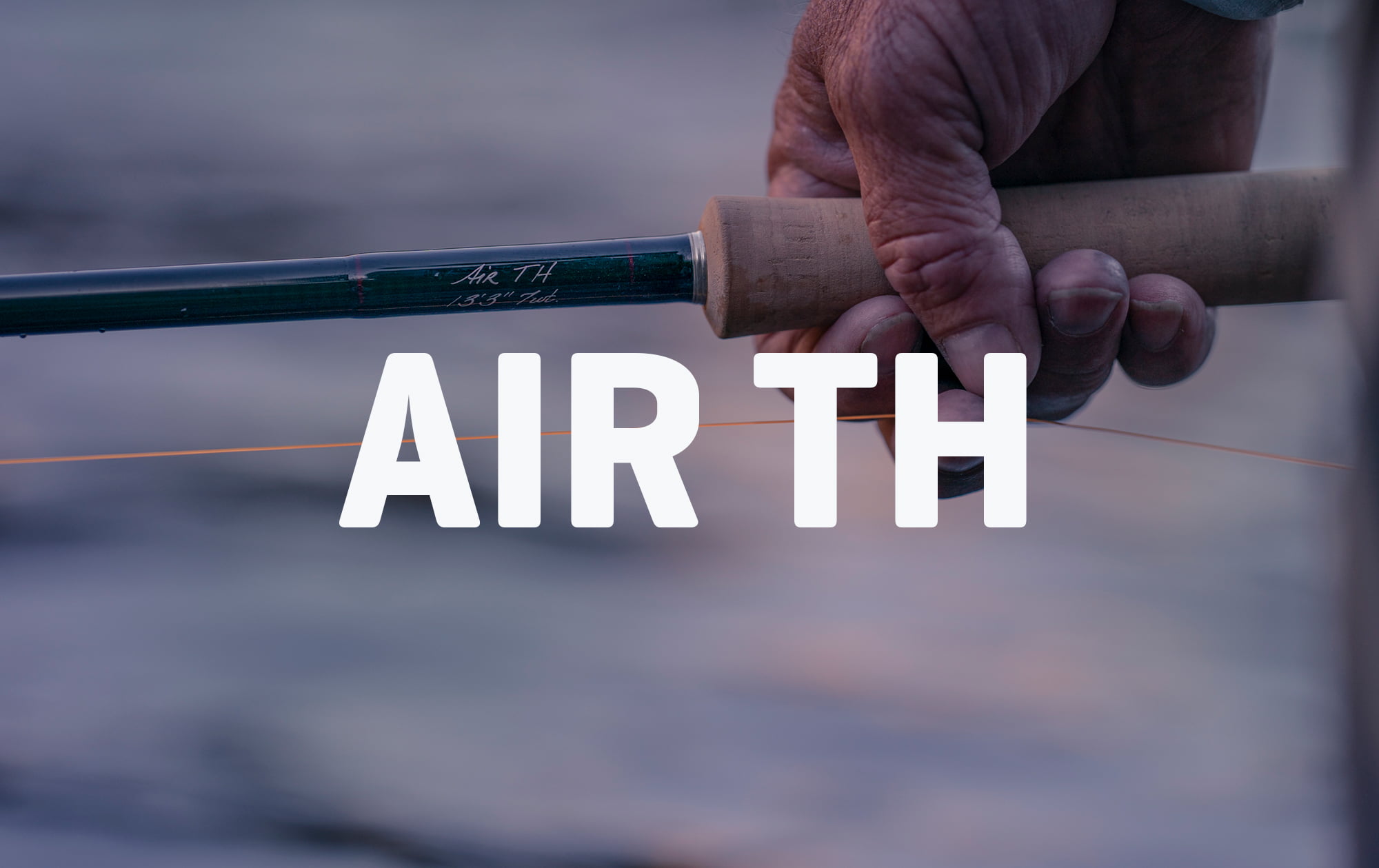 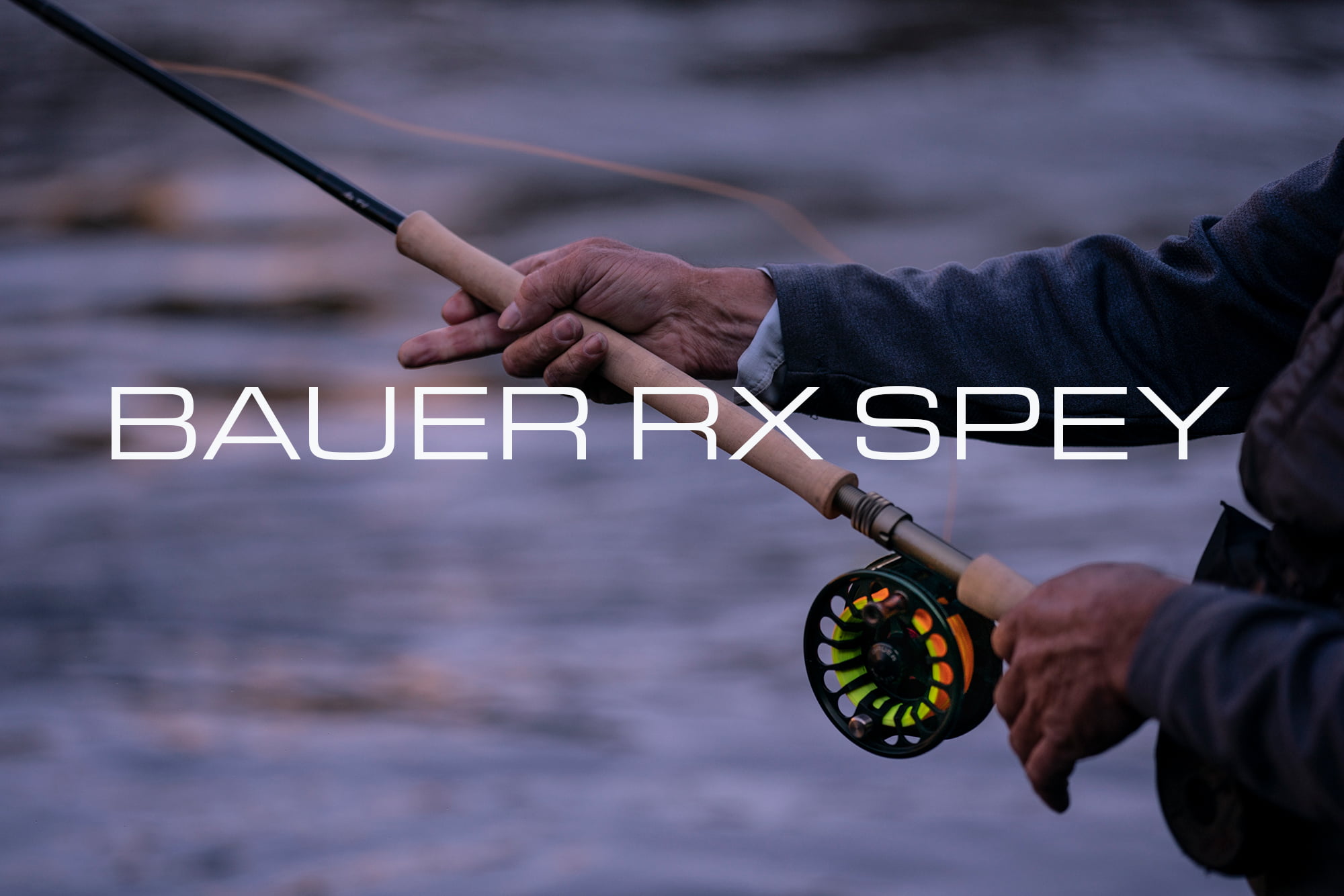 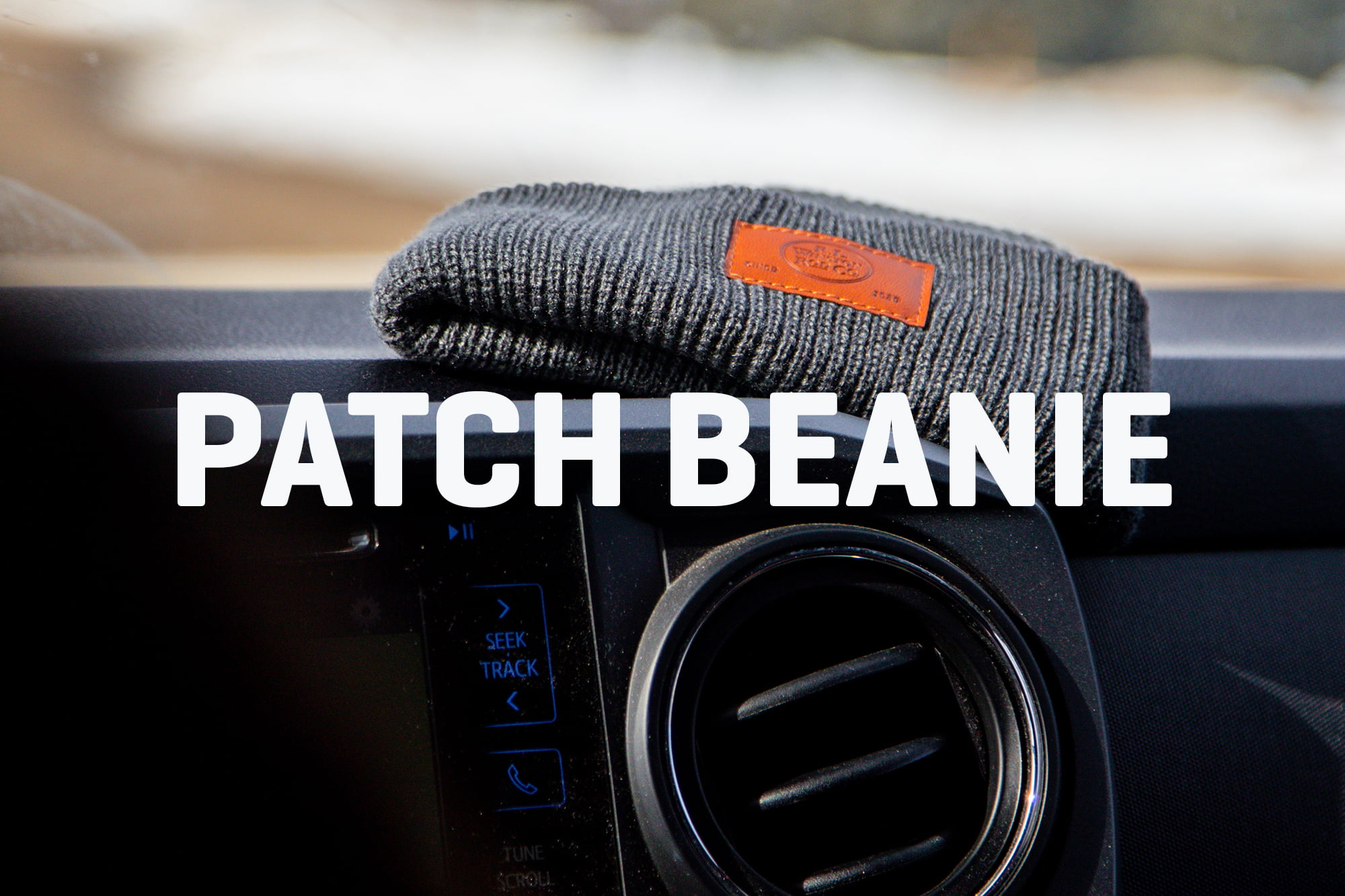 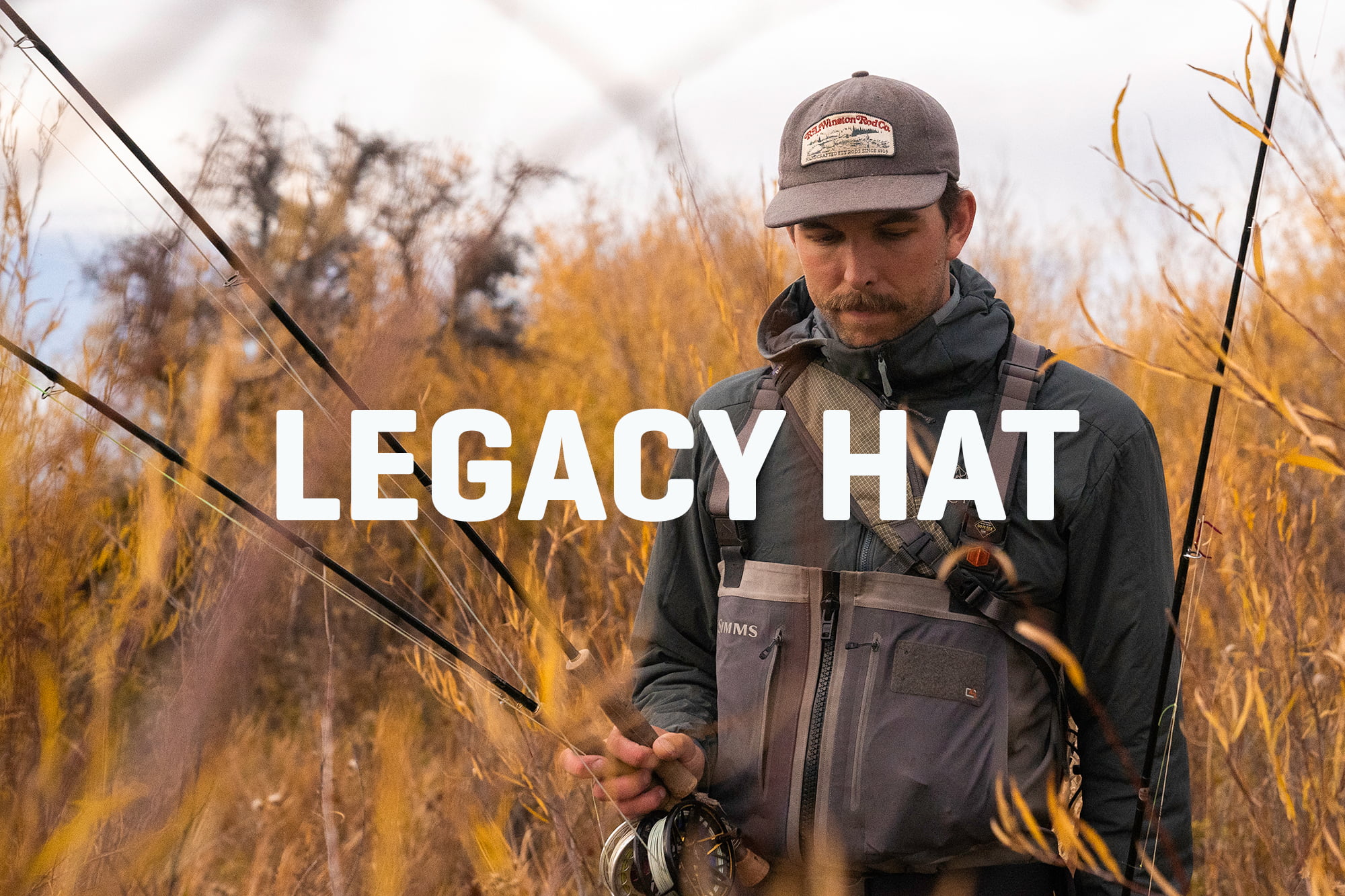