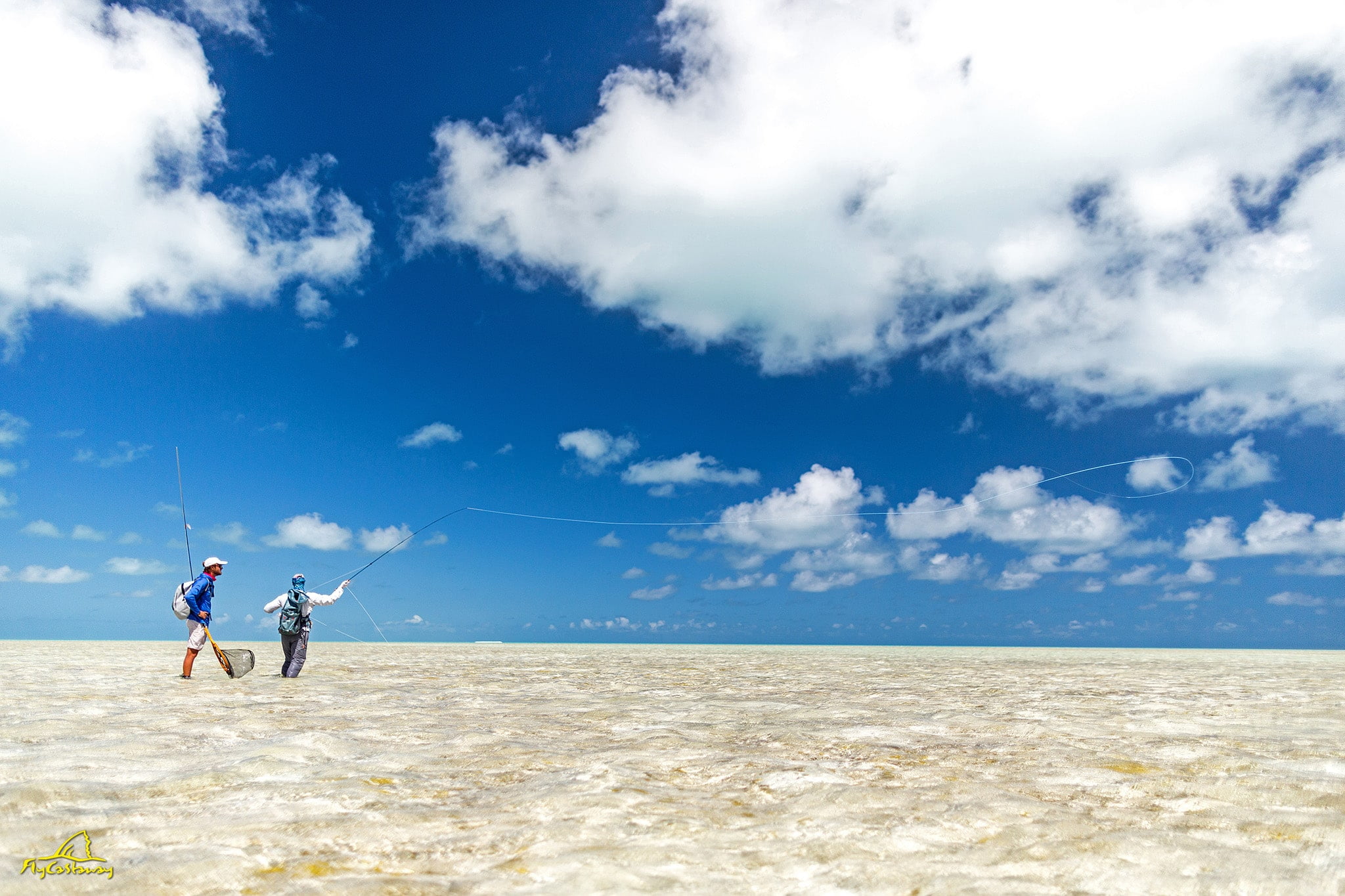 Winter 2017 went by fast for me. Despite the heaps of snow, I was on the road at show after show and didn’t have time to notice. I love the shows and doing my fly fishing seminars but about the end of March it hits me – I need to chase fish somewhere warm!

I was yellowfishing with South African friends of FlyCastaway back in November before show season when they simply said, “Currier, we need to get you to St Brandon’s Atoll this April”.

I tried not to show it but I quivered with excitement. St Brandon’s is an atoll off the tiny island country of Mauritius. To be more specific, Mauritius is about 700 miles due east of Madagascar in the southern Indian Ocean. It’s about as far from Victor, Idaho as you can travel. The distance is shorter straight through the center of the earth because it’s our antipode.

The atoll itself is was only discovered as a fly fishing destination in 2013 and has quickly earned a reputation as being the best bonefishing on the planet. On April 5th, me and a couple of my pals headed for St Brandon’s Atoll to meet up with my South African friends. 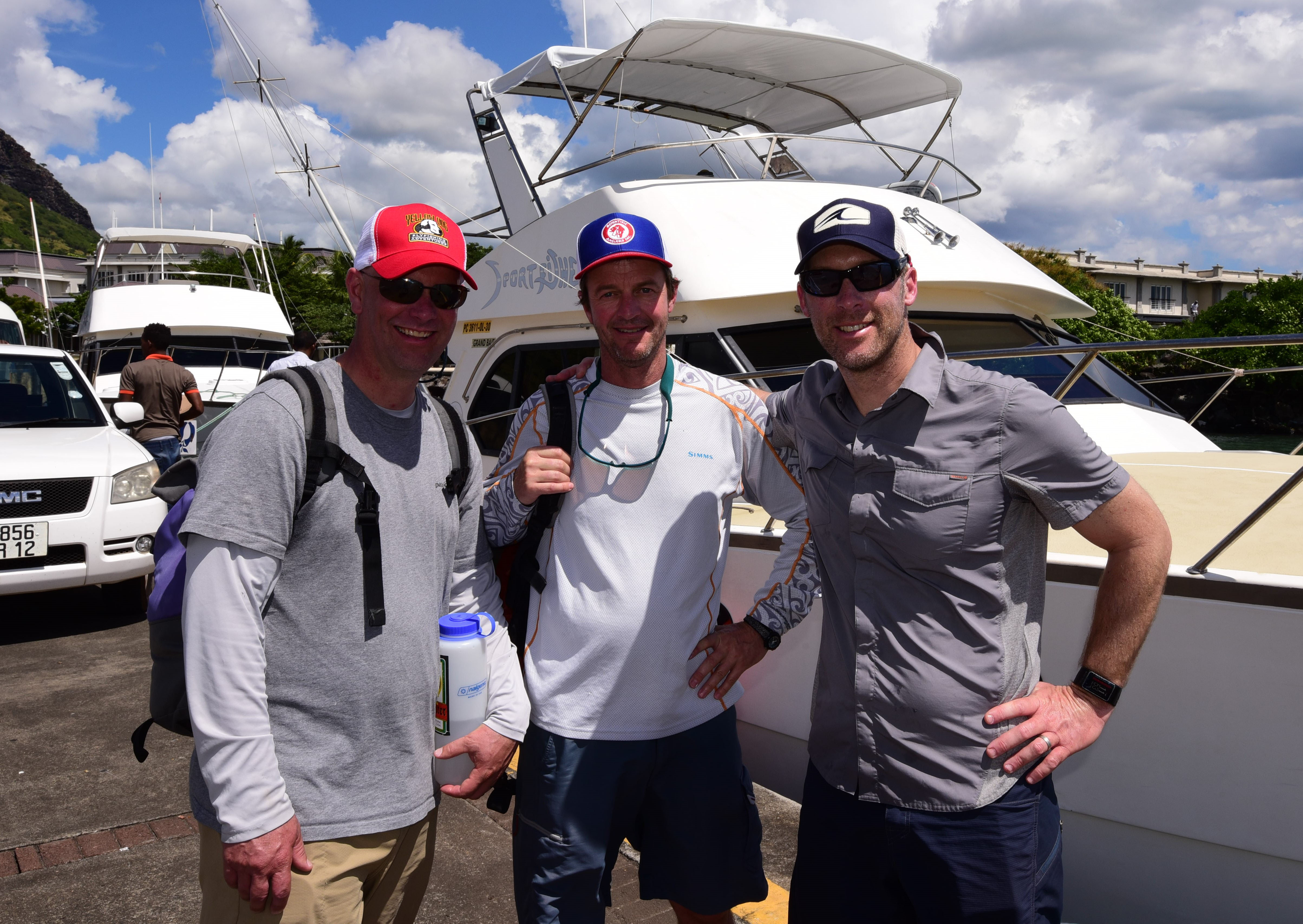 To say it was a long way to travel is an understatement. My friend Scott and I drove to Salt Lake City and caught a flight to Amsterdam. Then to Paris. Then another 11-hour flight to Port Louis, Mauritius. We spent two days conquering jet lag then met up with my friend and owner of FlyCastaway, Gerhard Laubscher.

We met Gerhard and other South African friends just in time to catch the 28-hour boat ride traveling 280 miles northeast of Port Louis to one of the most remote places on earth, St Brandon’s Atoll. I don’t know anyone that enjoys this boat ride and in fact, many spend the entire journey seasick. Lucky for me, I’m seaworthy and other than being bored out of my mind the ride wasn’t bad. On April 11th, we arrived at St Brandon’s Atoll.

The Atoll is a beautiful place stretching more than 50 miles. There are more flats than deep water and there’s a small fishing community. We stayed on Rafael Island and there’s a bunch of palm trees covered in nesting terns. It’s a racket of noise but our small lodge where we eat and sleep was extremely comfortable.

When I go on these exotic trips I have goals. On this trip, I had three goals with hopes to obtain two. #1 – catch the elusive and beautiful Indo-Pacific permit. #2 – experience the best bonefishing in the world. # 3 – catch three new kinds of fish for my species list.

Scott and I left the dock first morning with friend and FlyCastaway guide Brendan Becker. I’ve fished with Brendan in the Seychelles and in South Africa. It was great to catch up and he took us to a flat named Julies for bonefish. Scott hasn’t been on the flats in years so while Brendan helped him get organized I headed out with my 9-weight Jungle rod. 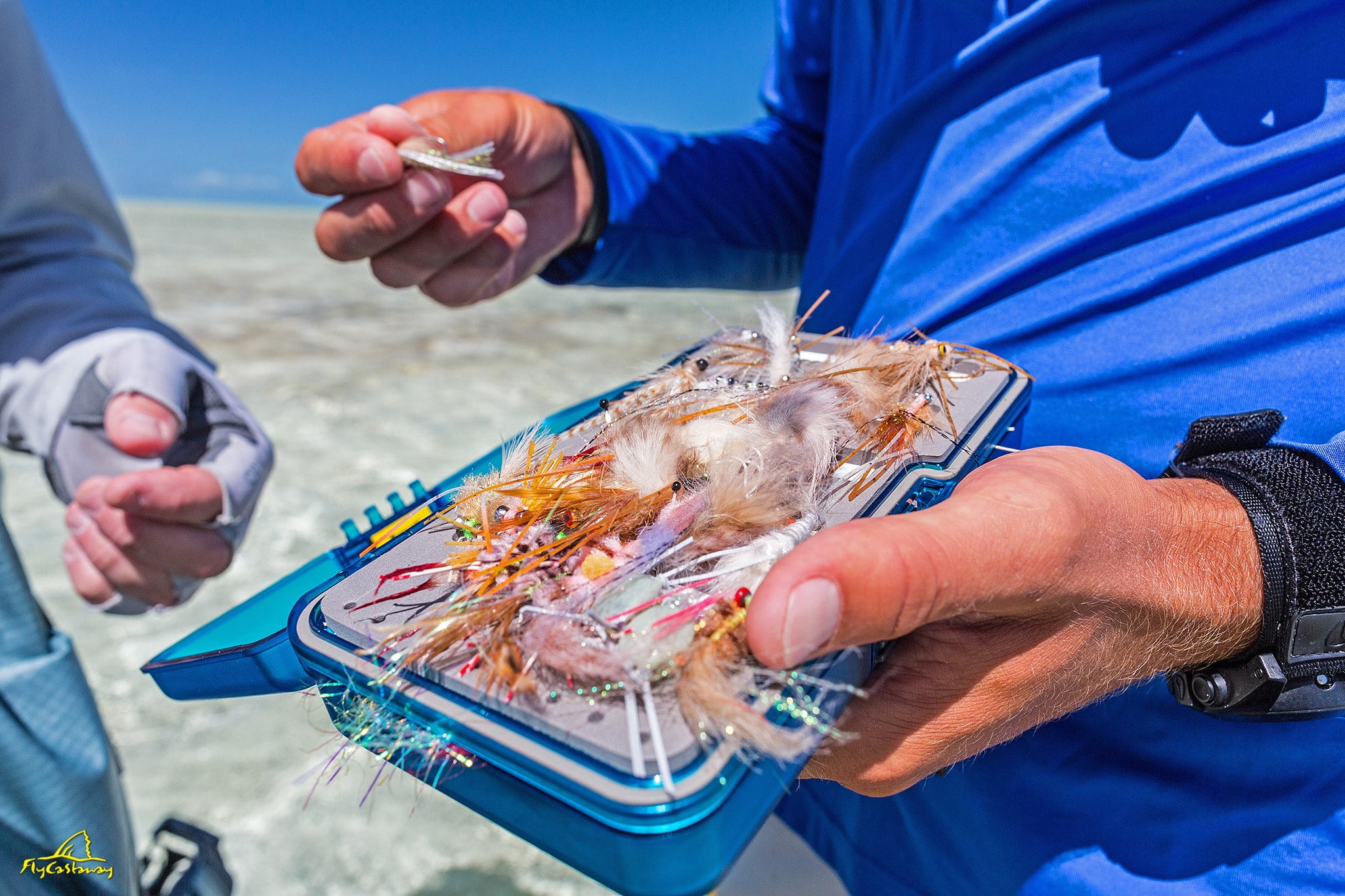 It took me about three minutes to find my first target. It looked like a hefty bonefish at that. I was using a small white crab, a pattern not only good for bonefish but also if a permit swam by. I eased my way into position and set up for an easy 60-foot cast. Everything went smooth as silk and my crab dropped a couple feet ahead of the meandering bonefish.

I always give my fly a quick strip to grab the fish’s attention when on the flats. When striped the bonefish charged and ate my fly. Bones always sort of sit there a second or two after you hook them as if they are winding up to take off. Sure enough that happened and my new Bauer SST Reel was singing.

One of my goals was met before noon the first day – experience some of the best bonefishing St Brandon’s has to offer. The bonefishing was so spectacular Scott and I got picky and targeted only big ones. We doubled up several times. 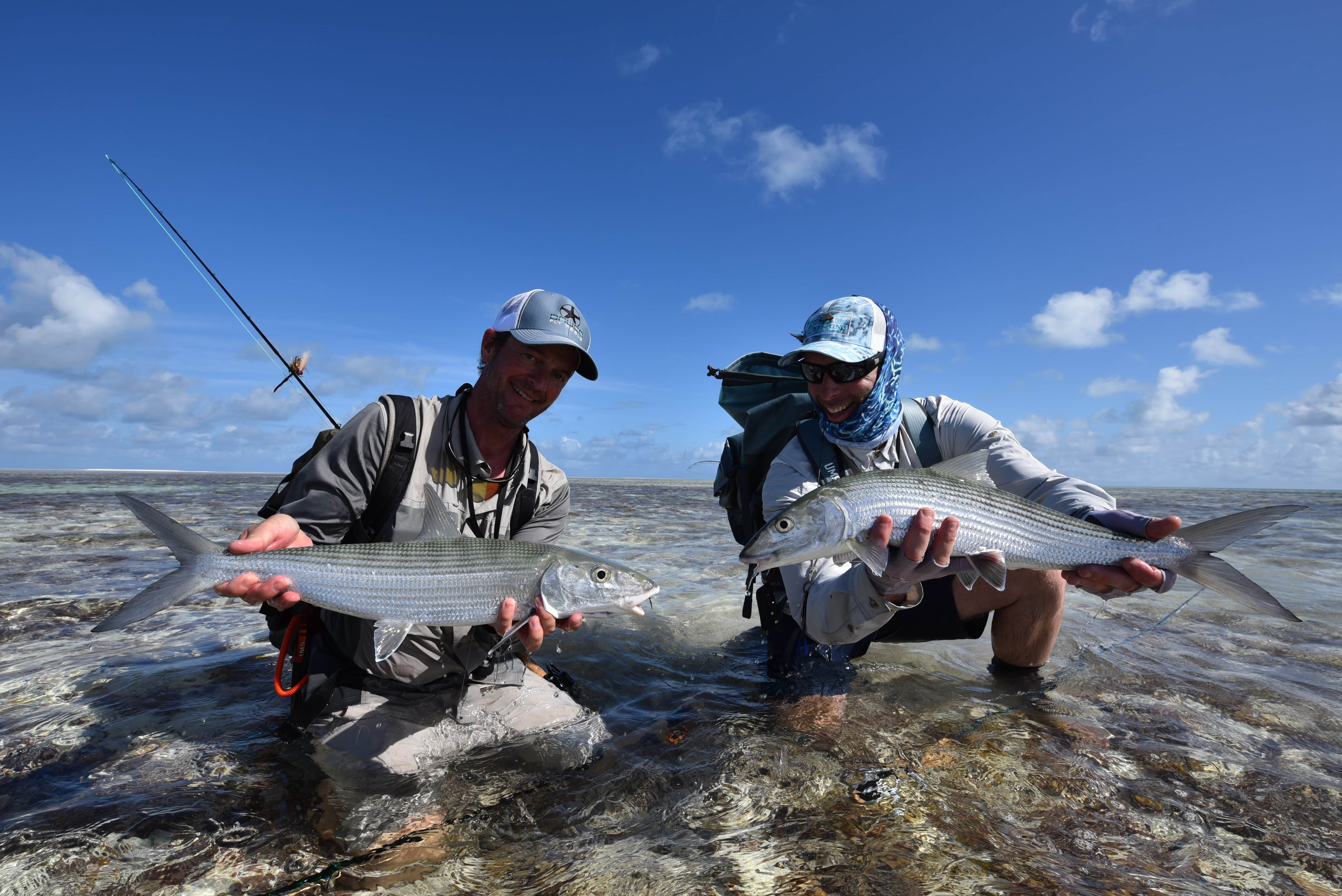 St Brandon’s is also known for a high population of Indo-Pacific permit, better known among saltwater fly fishers as the “yellow permit”. I spent two weeks living off the beaches of Oman in 2015 trying to catch one of these finicky fish but had few opportunities and never landed one. I must admit of my three goals this was my most wanted.

Unfortunately, the permit fishing was not its usual great. The entire Indian Ocean is experiencing El Nino and water temps on the flats are hot – too hot for permit to spend much time up on the flats. This being said there were a few around on the flats.

One afternoon Scott and I were walking with Brendan and ran into two schools of yellow permit. Scott knew how bad I wanted to catch one so the first ones that came he told me to go for it. There’s lots of theories on presenting the fly to permit. I’m no expert but the most popular approach these days is to hit the permit between the eyes with your crab. This forces them to make an immediate decision. They either spook or eat the fly. It’s a 50/50 chance which is much better than leading them and hoping they find and eat your fly. I pegged these first permit dead between the eyes and they took off like a nuclear bomb went off.

The next group that came was Scott’s turn. He has no theories and treated these permit like bonefish leading them a few feet. His crab fly hit the water and one of the permit flew into action and devoured his fly!

Scott got the fly line wrapped around the butt of his rod and the fleeing permit damn near broke him off right there and then. Scott had the sense to run after the fish the whole time creating slack to undo the tangle. He succeeded and after ten minutes of battle he subdued this magnificent yellow permit. 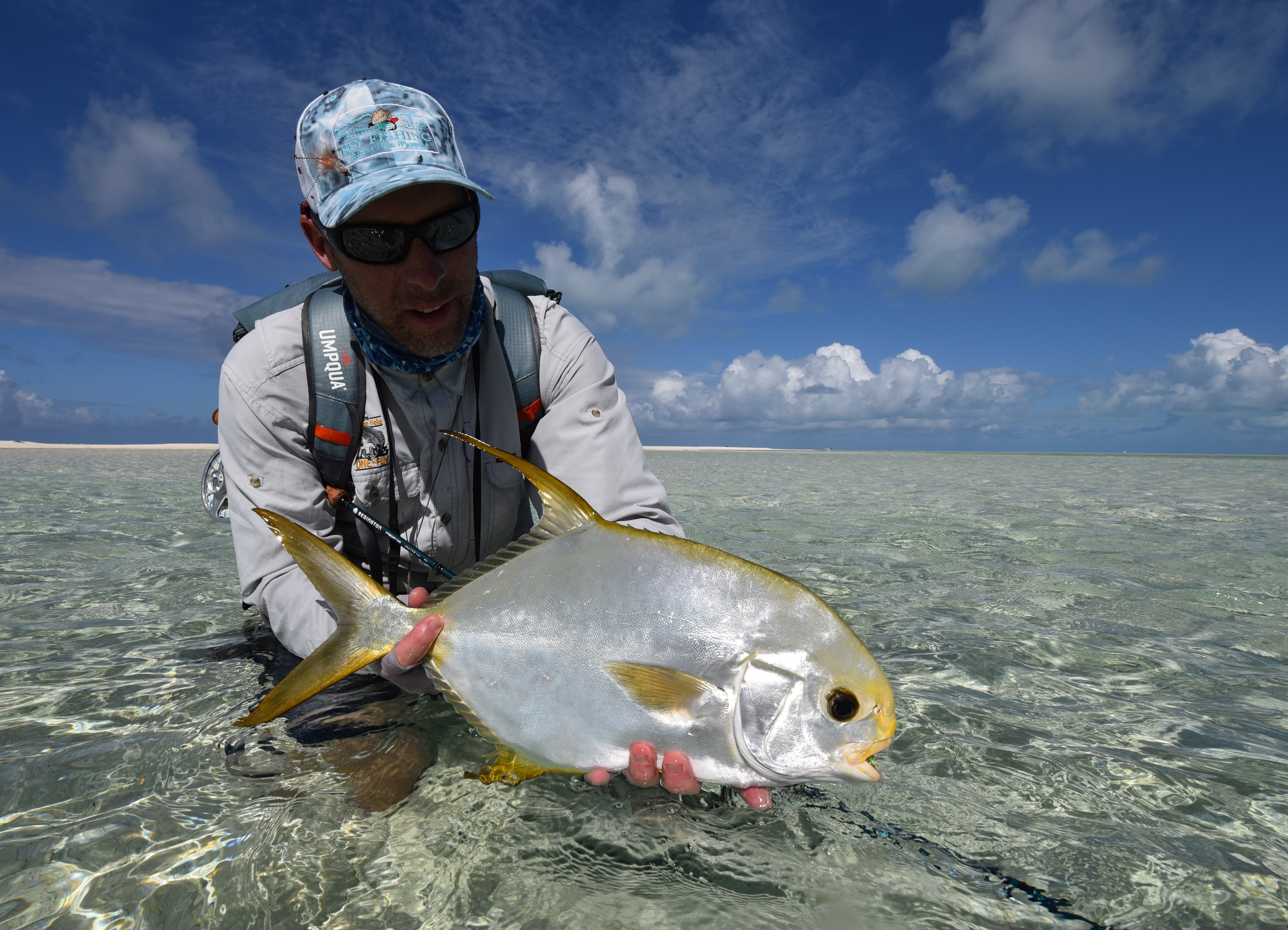 There were three permit caught this week in total. In a normal week there would be ten caught. I wish I could tell you one was by me but there are certain fish in the world that will hurt you no matter what. For me it’s the yellow permit and I’ll have to come back and try again.

It’s getting harder and harder for me each year to add new types of fish to my species list. I’ve been spoiled traveling to many locations and being given opportunities. However, there’s still plenty out there and with St Brandon’s being a new destination for me there had to be at least three new fish for me to catch even if the yellow permit didn’t cooperate.

One day Gerhard and I arrived on a massive flat. We expected to find heaps of bonefish but it was low tide and lower than normal. We decided to walk the edge of the flat facing the drop off while we waited for the incoming tide. I spotted an individual fish moving along. The movement was erratic telling me right away this was not a bonefish.

There’s no need for fish identification before a cast so I launched my crab fly. I was off on my cast so I stripped really fast to get it back in and try again but this fish managed to see my fleeing crab from about 20 feet away. I couldn’t have gotten my fly away if I wanted to and hooked up.

Although not a big fish this one certainly fought like he was big. I was deep in the backing in a matter of seconds. The fish was so far away I had to run after him. Once I stopped him however the fight was easy and soon I landed my first ever brassy trevally, commonly known as the green spot trevally. 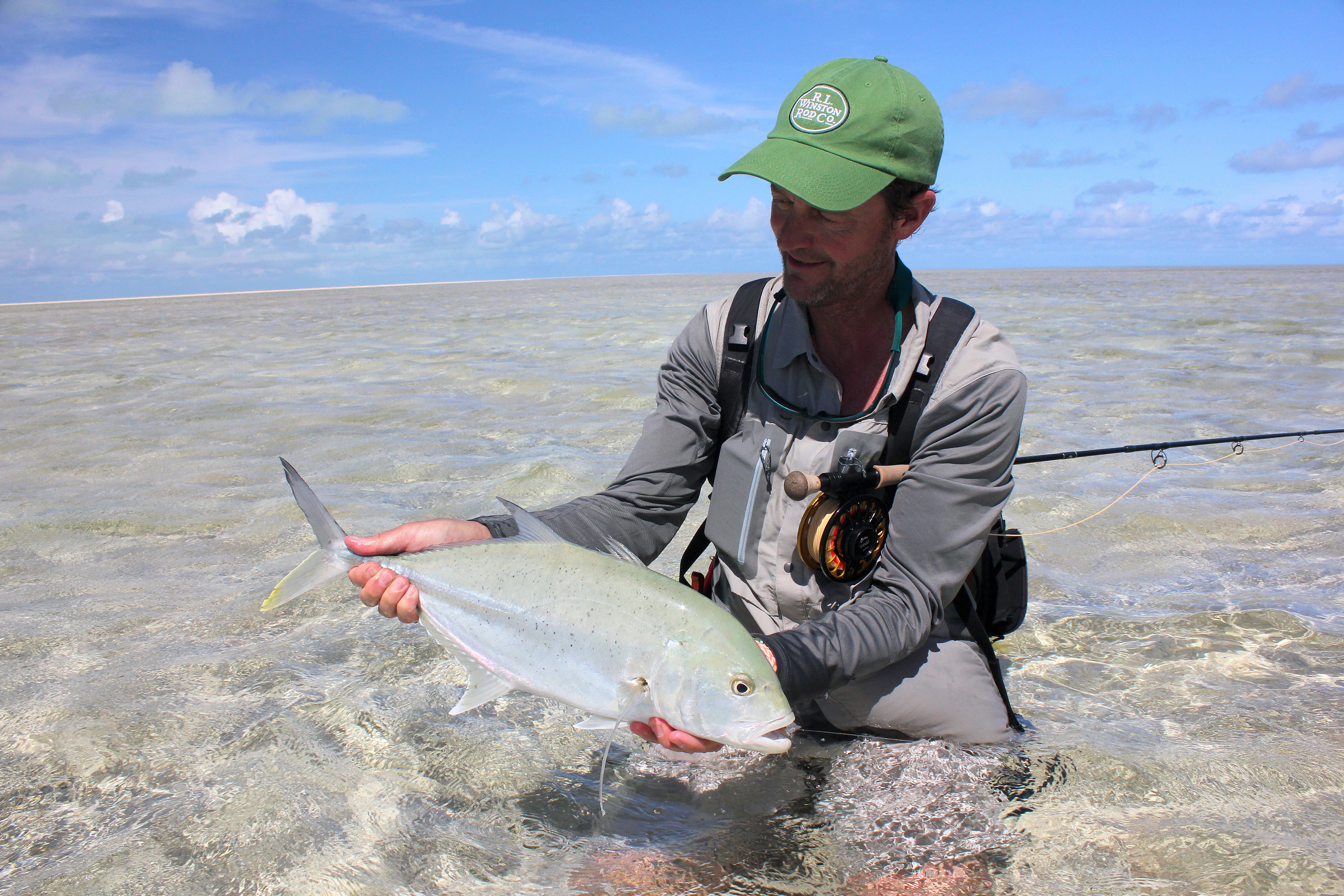 Odd catches sometimes come in groups and ten minutes later a school of tailing fish appeared in the distance. But these weren’t the casual tailers like bonefish. They didn’t stick around. The tails were up then a second later down. Then they reappeared in a different spot 100 yds. away. I considered the brassy trevally’s movement erratic but these fish were insane! 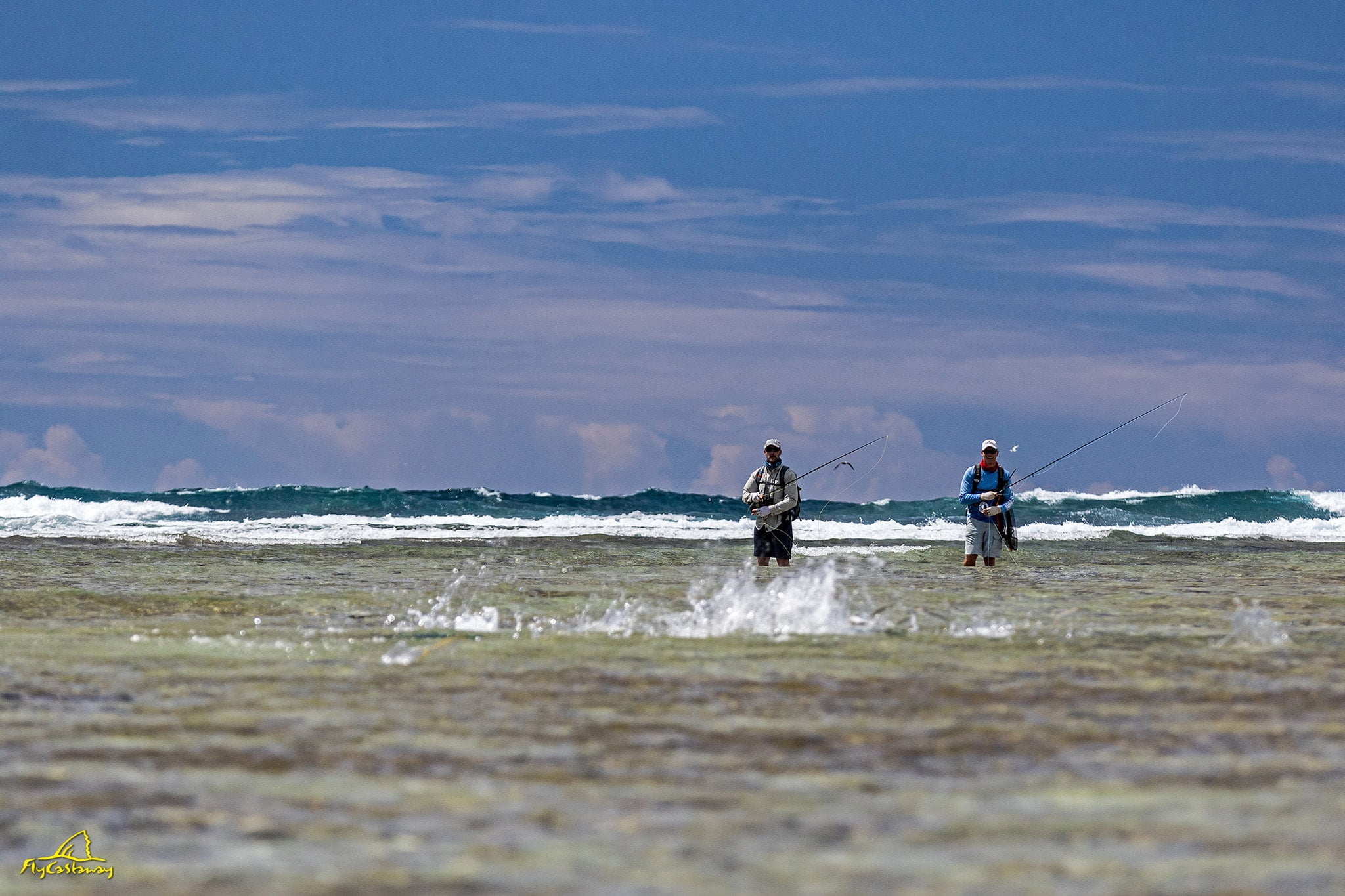 I had no choice but to run them down or they’d likely be gone before I had a chance. Just when I got to where I thought the fish where I noticed in mid false cast they’d moved on me. Off I went running again.

The chase went on for another minute. Everywhere I thought these fish were there weren’t. I was running and twisting, out of breath and nearly fell several times. I wasn’t even sure what kind of fish I was casting too. If I had to guess I would have thought golden trevally.

Exactly when I thought these fish had beat me, they made the wrong move. They swam right to me. I landed my fly amongst them and on the first strip I had one on. Another fantastic battle ensued and soon I landed my second new species in an hour. This is the island trevally better known as the yellow dot trevally. 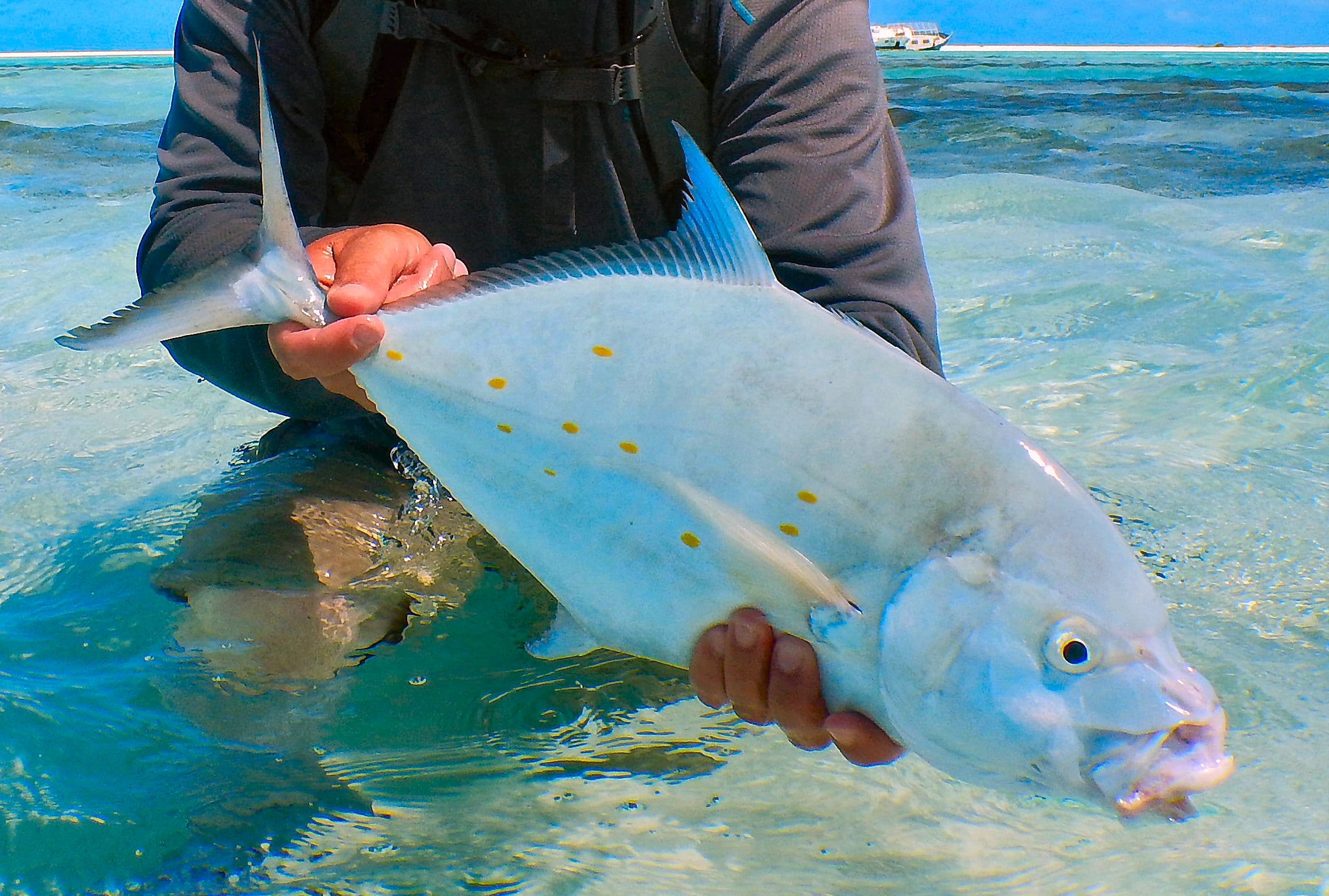 I only for sure landed one other new species at St Brandon’s. He’s by no means some sought after game fish but he’s cool nonetheless. It took some research but he’s the rock-mover wrasse. 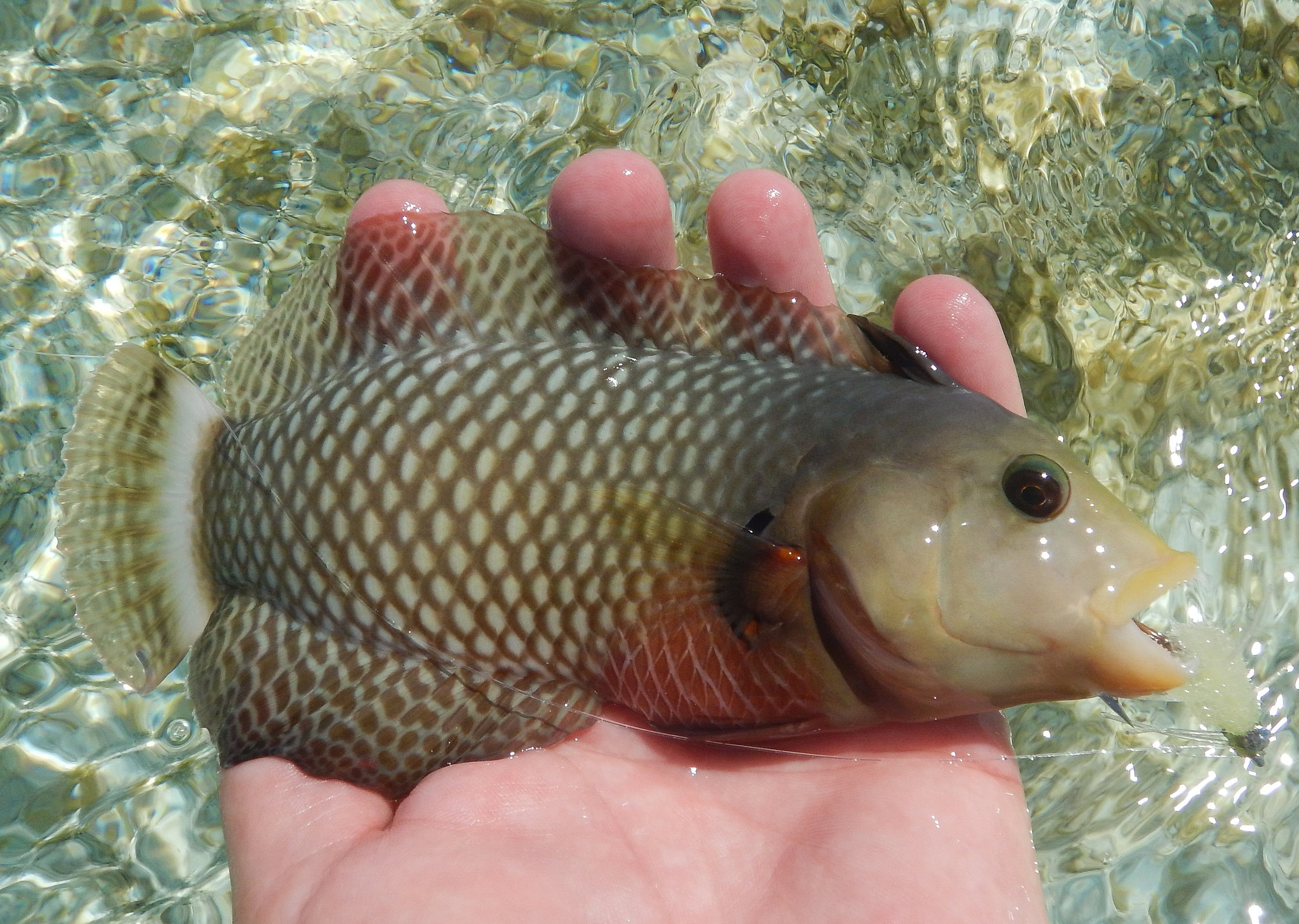 There’s so much more to tell about this incredible trip to St Brandon’s Atoll in Mauritius. In a nutshell I’ll tell you this, hands down it’s the best bonefishing I’ve ever experienced and possibly the best on earth. I’m also going to be sure and make it back – probably more than once. The fishing is remarkable and I feel like in addition to needing to return for my yellow permit, there’s plenty more. 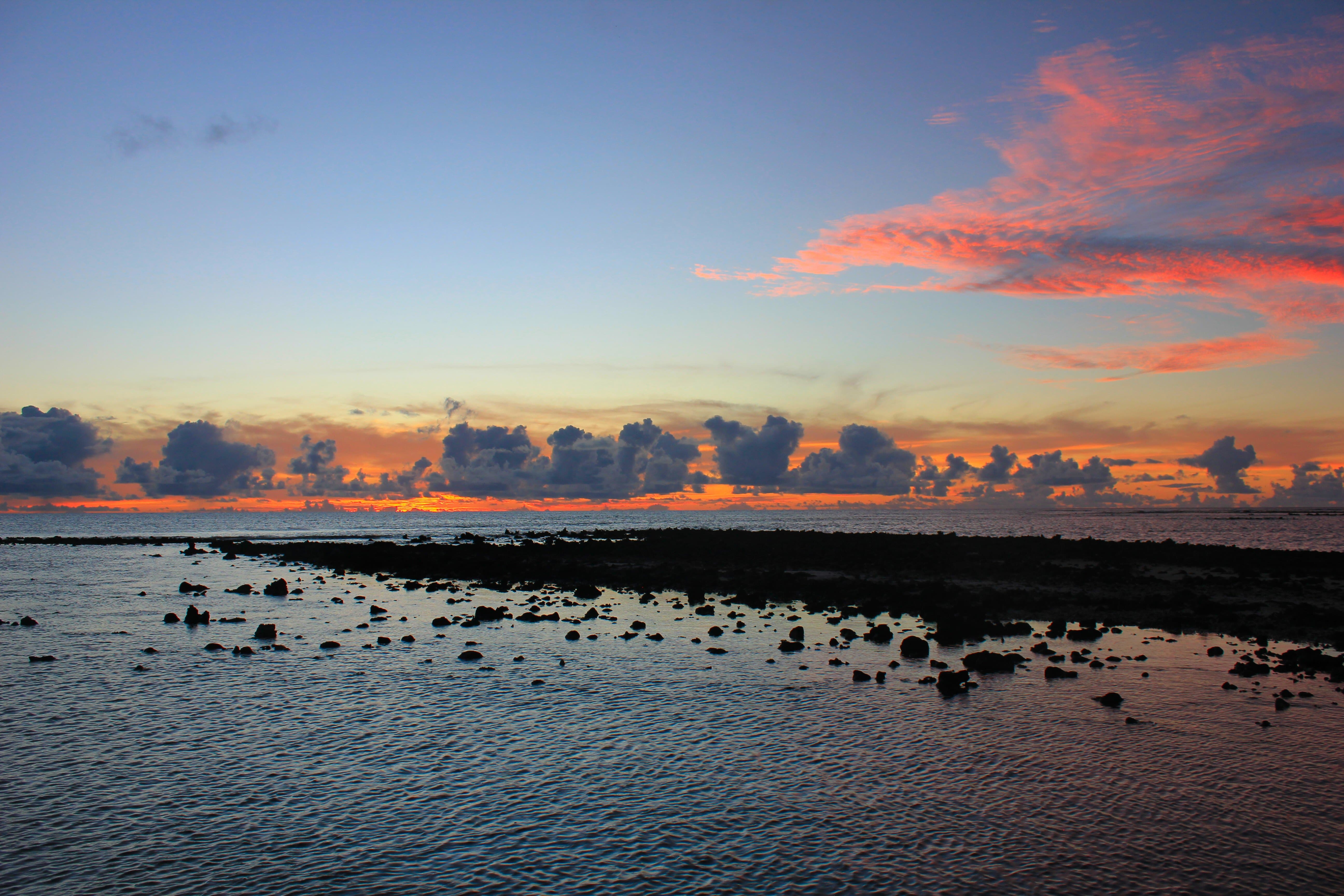 I must also thank my host Gerhard Laubscher of FlyCastaway and his fantastic crew of fishing guides. I’ve fished with many guides over the years and Brendan, Craig and the crew are the finest saltwater fly fishing guides I’ve had the pleasure to fish with.

To read more of the day by day accounts of Jeff Currier’s amazing trip to St Brandon’s Atoll in Mauritius, be sure to check out his blog at: