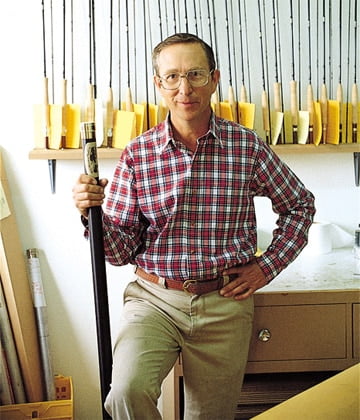 It is with great sadness that we learned that our friend, Tom Morgan, former owner of the R.L. Winston Rod Company and one of the pioneers in graphite and bamboo fly rod design, died peacefully in Bozeman Montana on Monday June 12, 2017.

Tom was a great man, creative, generous, principled and passionate. In 1976, he moved Winston from San Francisco to Montana to be closer to great trout fishing. And even now, decades later, every fly rod we make continues to incorporate an element of Tom Morgan’s rod design philosophy that to be a great fly rod, it should be a joy to cast. But more than a talented angler and rod designer, Tom’s tremendous optimism, passion for life and resilience were inspiring. He was a role model, a generous and unfailingly supportive mentor, and a friend. We will miss him.

Tom grew up fishing and guiding in Ennis Montana, where his family operated the historic El Western Motel. In 1973, Tom Morgan purchased the R.L. Winston Rod Company from Doug Merrick. Together he and Doug developed the Winston Glass Stalker in the 1970s. These fiberglass rods were made to cast light lines and were developed with the challenging rivers and spring creeks of Montana in mind. In 1975 Tom introduced Winston’s first line of 2-piece graphite rods and they were met with great success.

In 1976, he made the decision to move Winston from San Francisco to Twin Bridges, Montana in order to be near the world-class trout fishing of the Beaverhead, Big Hole and Jefferson rivers.

In 1987, Winston designed a series of 2- and 3-piece fly rods using the new IM6 graphite. These fly rods became instantly successful and further refined comprised a fluid and balanced action which has since become celebrated as “The Winston Action.”

Tom grew up fishing the spring creeks of Montana for wary brown trout where the slightest mistake spooks the fish. He designed the “Tom Morgan Favorite” as a specialized 2-piece,extra light, 8’ 4-weight, made from IM6 graphite for those delicate or close to mid-range distances where delicacy, finesse, and accuracy are essential. The “Tom Morgan Favorite” was introduced in 1989 to commemorate Winston’s 60 years of fly fishing tradition. First offered as a limited edition 60th Anniversary model, the rod proved to be so popular that it can still be purchased today on a special order basis.

In 1991, after almost 20 years running the company, Tom sold Winston to David Ondaatje. Tom remained with Winston as an advisor for several years and his graphite rod designs became the foundation for many of today’s popular Winston rods. We continue to believe in Tom’s principle that “a great fly rod is always a great fly rod” is as true today as it was when he owned the company. In fact, while they may own several of our newest models, many of our customers continue to use and enjoy Winston rods built many years ago.

Tom’s legacy at Winston and for the entire fly rod industry cannot be overstated. He was a pioneer and a great man. We are proud and lucky to have known him.